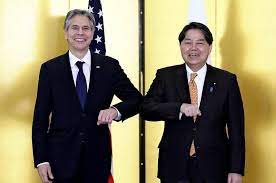 Japan, the United States, Britain, Australia and New Zealand are arranging a meeting of their foreign ministers in New York to support Pacific Island nations, in tandem with the UN General Assembly late this month, it has been learned.

China is expanding its influence over Pacific Island nations through economic assistance, and the five countries aim to counter these moves by working together to enhance their development assistance in the region, according to several government sources.

In June this year, the five countries established the Partners in the Blue Pacific (PBP), a framework to support the Pacific islands, and have been holding high-level talks. The next meeting will upgrade these discussions to the foreign ministerial level.

The five countries will also explore ways to strengthen cooperation with the island nations in areas such as countermeasures for natural disasters and maritime surveillance.

Since 1997, Japan has held the Pacific Islands Leaders Meeting every three years, inviting the leaders of the island nations to deepen relations. Japan intends to show its leadership in the cooperation among the five countries, drawing on the expertise it has accumulated in supporting the island nations.

China has used its huge economic power as leverage to strengthen its presence in the Indo-Pacific region. In April, it concluded a security agreement with the Solomon Islands, and in May, State Councilor and Foreign Minister Wang Yi held a meeting of foreign ministers from 10 island nations in Fiji.

In August, a U.S patrol vessel was denied port calls to the Solomon Islands.

The United States is increasingly concerned about China’s penetration into the Pacific Islands. It is expected to hold a summit meeting with the island nations in Washington in late September to convey the importance it places on the Pacific Islands.