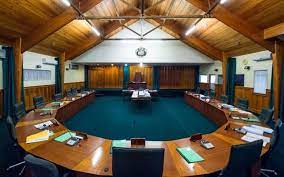 The Nauru Parliament has been dissolved and election to be held on on 24 September.

“By virtue of the powers in that behalf vested in the Speaker of Parliament, Marcus Stephen, by Article 41(7) of the Constitution of Nauru, and all other powers, and in accordance with the advice of the President of Nauru, hereby dissolve the 23rd Parliament of the Republic of Nauru” a government statement said.

Meanwhile, the electoral roll has been published in a government gazette.

The electoral roll is also available for public viewing outside the National Election Commission’s headquarters at Civic Centre in Aiwo.

The voter roll will close on Saturday, 03 September at 5pm. Registrations and transfers will not be accepted after the roll closes.

The Nauru Electoral Commission (NEC) has begun its voter community outreach sessions with the first one already held in Aiwo.

The NEC aims to use these sessions to inform and educate the public on the processes and procedures of voting in the forthcoming general elections, especially first time voters.

PNG Electoral Commissioner :No election will be deemed as failed