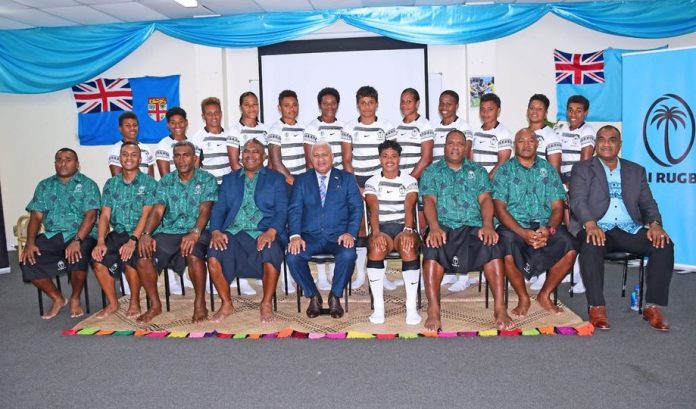 Fijian Prime Minister and President of the Fiji Rugby Union, Voreqe Bainimarama has urged the Fijiana Women’s Rugby Sevens Team to play to the best of their abilities in the upcoming Rugby World Cup Sevens Tournament in Cape Town Stadium, South Africa.

While presenting the jerseys to the Fijiana Sevens Team, Prime Minister Bainimarama told the 13-member squad that they have proven themselves and are “levelling shoulders” with some of the finest in women’s sevens rugby around the world.

The Head of the Fijian Government also advised the team which is led by Captain, Rusila Nagasau, to display good sportsmanship on and off the field and also to make Fiji proud.

Prime Minister Bainimarama took the opportunity to also highlight that Fijians here and abroad will rally behind our strong Fijiana team to show our support.

He thanked the coach, Saiasi Fuli and the management for their tireless efforts and contribution towards the team’s preparation to the World Cup.

After an outstanding performance at the Commonwealth Games in England, Fijiana has now put its focus on going a step closer and winning the RWC title for the very first time.

Fuli said the 13 players who have been selected are purely based on form and their commitment to training.

The Head Coach has maintained his core players who have played a vital role in the team during the HSBC World Rugby Womens Sevens Series and Commonwealth Games.

Speedster Aloesi Nakoci has earned her spot back into the squad after missing out on the Commonwealth Games which finished earlier this month.

Captain Rusila Nagasau and winger Lavenia Tinai are the only two players who played at the Rugby World Cup four years ago.

Vani Buleki, Verenaisi Bari and Laisani Moceisawana will hope to showcase a much-gutted performance after making their debut for the national team this year.

Preparation for the World Cup has been solid for the Fijiana 7s as they look forward to improving on their silver medal showing from the Commonwealth Games.

“We have our tour objective that is to win the Rugby World Cup and I believe this is the best squad to go and deliver that objective.

“It’s a knockout format and every game is a final which is interesting and different from the series and Commonwealth Games but we have to train the different scenarios and always expect the unexpected,” said Fuli.

The Fijiana 7s will play Japan in their opening match at 11.17 pm on Friday the 9th of September.