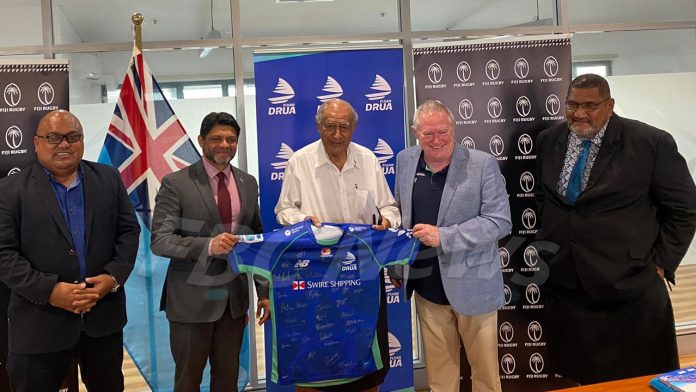 The Fijian Drua’s journey into the 2023 Super Rugby Pacific season received a major boost Wednesday with the Fijian government’s commitment of another $3 million(US$1.5 million).

This is part of our government’s $6 million investment to purchase 51 percent of the Fijian Drua’s shareholding rights with $3m paid out in April.

Minister for Economy Aiyaz Sayed-Khaiyum officiated at the signing of the Shareholders Agreement between Counter Ruck PTE. LTD (CRL) and Fijian Government which means the remaining $3m (US$1.5 million)will be injected into the Drua.

Tawake says the government’s assistance shows its vision of using sports as a lever for change.

”Government’s vision in using sports such as rugby as a leaver for change to unite Fijian communities and bring smiling faces across our communities is realized today, in addition, noting the potential opportunities that Fijian Drua will create sports tourism and other sectors in the six Drua home games”.

He said the Drua’s six local games will be beneficial to our economy.

Sayed-Khaiyum said the government’s investment will also see the creation of a world class center of excellence in Nadi.

”This second payout will ensure the Drua continues down this path of progress giving our young rugby players a pathway to aspire to, it gives them the chance and opportunity to play professional rugby here at home among their families, communities and of course their friends”.

The CRL was established by the FRU to own and operate the new Super Rugby franchise, in which the government owns 51% of the shares.