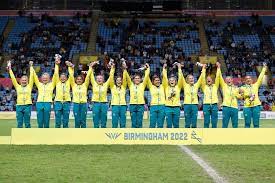 The Australian Women’s Sevens side have claimed the gold medal at the Commonwealth Games with a 22-12 win over Fiji.

A first-half burst put the result out of question as Faith Nathan scored a double, securing the first gold medal in program history.

This came after an incredible semi-final performance to eliminate New Zealand 17-12, getting a measure of revenge four years on from Gold Coast.

Meanwhile, the Men’s side finished fourth after defeats to South Africa and New Zealand

They produced a gutsy 7-0 win over Samoa to book their spot in the final four before falling to South Africa 24-12 in the semi-finals.

The Kiwis proved too strong in the bronze medal match as they cruised to a 26-12 win.

Australia have cruised to victory in the opening pool match of the Commonwealth Games Rugby Sevens, defeating South Africa 38-0.

Tim Walsh’s side were dominant from the start as Maddison Levi burnt the defence to score inside 30 seconds.

Three further tries in the space of five minutes, including a double to Levi, put the game well out of reach by half-time.

Charlotte Caslick then put an exclamation on the strong start, racing 80 metres to score straight from the kick off.

Madison Ashby’s late try helped seal the shutout win as they prepare to face Scotland later in the day.

Fiji have shocked world champions Australia, coming away with the 19-12 win.

Fiji got off to the perfect start with Rusila Nagasau bursting away to open the scoring.

Sesenieli Donu added the second just before the break as they cruised to a 12-0 lead.

Two late tries to Maddison Levi and Demi Hayes helped reduced the margin but Fiji found enough to hold on.