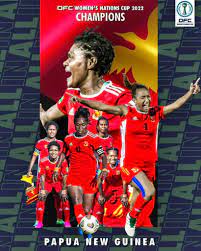 Papua New Guinea have won the OFC Women’s Nations Cup 2022 for the first time after beating host nation Fiji 2-1 in the final in front of a boisterous crowd at the HFC Bank Stadium in Suva.

After previously finishing as runners-up on three occasions PNG can finally call themselves champions of Oceania after first-half goals from Meagen Gunemba and Ramona Padio secured the trophy, as well as qualification for the FIFA Women’s World Cup 2023 Play-Off Tournament.

The game began at a frenetic pace, both sides showcasing their exciting attacking play with Cema Nasau and Trina Davis coming close for Fiji while Lucy Maino headed wide for PNG.

But it was Papua New Guinea who struck first, with the in-form Gunemba providing the clinical touch once again. Padio’s lobbed pass unleashed Marie Kaipo down the wing, who laid the ball on a plate for Gunemba to smash home the opening goal of the final.

Kaipo then headed wide before PNG took control in the Fijian capital. Padio’s dangerous free-kick eluded Fiji goalkeeper Seruwaia Vasuitoga, who was clearly struggling with an injury at the time, sneaking over the line at the near-post for 2-0.

Fiji’s substitute goalkeeper Selai Tikoisuva was then called into action by the impressive Kaipo before Fiji forced their way back into the game just before the break.

As she has done so often throughout this tournament, midfield maestro Nasau provided the catalyst for Fiji. A well-placed dead ball delivery from Davis found Nasau at the back post, who nodded her header goal-bound to reduce PNG’s advantage despite defender Margret Joseph’s best efforts to clear.

A new name has not been etched into the winners column of the OFC Women’s Nations Cup since 1994 and Fiji were not going to let this opportunity slip away without resistance.

Nasau’s drive and run rocketed over the crossbar, PNG goalkeeper Faith Kasiray tipped over in quick succession from Vanisha Kumar and Koleta Likuculacula and captain Sofi Diyalowai headed wide from a corner In an early second-half onslaught from the Kulas.

Gunemba then tried her best to go clear of the tournament goalscorer charts but saw her long-range attempt sail wide before Likuculacula’s close-range effort was well stopped by Kasiray.

The PNG keeper was then left scrambling after failing to handle Nasau’s driven effort but no Fiji players reacted in time to punish her as PNG rode out the storm.

With both sets of fans loud in voice Fiji pushed for a leveller but Nicola Demaine’s side remained dangerous, with Maino’s header hitting the woodwork.

It proved not to be costly as Papua New Guinea held on to ensure they were crowned champions of Oceania for the first time and also secure their place in next February’s FIFA Women’s World Cup Play-Off Tournament in New Zealand.

Papua New Guinea head coach Nicola Demaine said :“We’ve got seven mothers on the team and these ladies have been together for two and a half months and made massive sacrifices. This is all on them what they have achieved so far so we can watch and see what they can achieve at the next stage.

“They are amazing women warriors who have earned the right to take this trophy home today and to represent Oceania at the next stage.”

Fiji head coach Lisa Cole said :“I am definitely proud of the effort they put in today. That was a great game to watch. Both sides were running hard to try and create a goal. Papua New Guinea has got dynamic forwards. It was a great match and unfortunately we ended up on the losing side of it.”