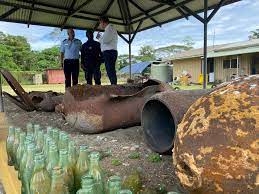 Imagine living in a city that is still littered with bombs from about 80 years ago – and then one exploding. Maerverlyn survived, but her friends didn’t.

The scars of war cover Maeverlyn Pitanoe’s body. The 50-year-old mother-of-two was blown up while at a Mother’s Day fundraising barbecue in Solomon Islands last year by an unexploded World War Two bomb.

The flesh on her arms and legs was flayed to the bone.

“I was standing right on the bomb. I didn’t hear the blast but I heard this hissing sound. [Then] I was going backwards … next thing, I was on the ground,” she recalls, looking at her shattered body.

“I saw two fingers hanging, one was already gone … I just prayed, ‘God help me.’”

The scourge of unexploded ordnance (bombs and ammunition) in one of the most impoverished countries in the world was highlighted earlier this month during commemorations for the 80th anniversary of the Battle of Guadalcanal.

What is now the capital of Solomon Islands, Honiara, was a battlefield in 1942, where the U.S forces turned around the Japanese advance through the Pacific for the first time.

Thousands of rounds of ammunition and bombs were fired and dropped into the rolling hills of the now-bustling city, some with an estimated failure rate of one-in-three, leaving potentially thousands of unexploded rounds in the ground.

Deaths due to unexploded ordnance (UXO) are a regular occurrence across the country’s former battlefields. The mounting death toll in the city has people looking to the U.S – which is belatedly on a diplomatic push to re-engage in the Pacific region – and the other combatant and now ally, Japan, to take responsibility.

For more than a decade, Australia has led the clean-up effort and trained the Royal Solomon Islands Police Force (RSIPF). Royal Australian Navy ships bombarded Guadalcanal during the World War Two battle of the same name.

At that Mother’s Day event, as Maeverlyn cooked over an open fire and served two young men, Raziv Hilly and Charles Noda, the U.S-made 105mm high explosive artillery shell detonated beneath their feet.

They took the full force of the blast. Both men had their legs blown off. About 30 youth group members at the barbecue escaped with minor injuries.

Pitanoe was not expected to survive, but after 53 days in hospital was discharged. Her life has since changed dramatically.

“I have no [government] support. I have sick parents who are depending on me. I don’t have the strength anymore, the spirit is there but I can’t do it,” she says.

The blast happened at Rusilla Posala’s home, where Raziv had been living with his aunty.

“We lived here 17 years and that is the exact spot where I used to burn the grass clippings. I didn’t even think there would be a bomb,” Rusilla says.

“The house shook, and we were just in shock. Then we look out and everybody is screaming.

The sound of war again in Honiara.

She remarks on the irony that her uncle Biaku Gasa saved future U.S president John F. Kennedy after his boat sank when he served in Solomon Islands during the war, but the war has now claimed his great nephew.

“The war was responsible for this. There should be a thorough clean-up. The Americans and Japanese should at least make an effort.”

She, like most of those affected, has received little or no government support.

Billy Buka was with his best friend and cousin Charles at the BBQ and was helping inside the house.

“It was a perfect day, we were having fun,” he says.

“It happened so fast, we were very panicked. I ran down to help Charles and it’s the first time I’ve ever seen such a huge injury.”

Charles, who was 38, died a week later in hospital, leaving behind his wife and four young children.

“It’s still fresh in my mind, sometimes I miss him so much,” Billy says.

“We were very close, he was the primary provider, worked as an accountant and had big dreams for his family.

“We’re innocent victims of what they did here, we never asked for them to come and wage war on our islands.”

“It’s not safe for me to light fire; it’s always on my mind, always remember what happened to my brother,” he says.

“My brother left three girls and a boy, we are trying our best to support them. The government doesn’t give any money, or the Japanese or U.S governments.”

Earlier this month, Honiara hosted ceremonies to commemorate the 80th anniversary of the Battle of Guadalcanal. The US delegation for commemorations was led by Deputy Secretary of State Wendy Sherman, accompanied by ambassador to Australia, Caroline Kennedy, daughter of JFK.

Addressing dignitaries at the US monument in Honiara, Solomon Islands Minister for National Security and Police Anthony Veke called for a “skilled up effort to remove UXO and chemical materials that continue to pose a security threat to the people”.

The high-level diplomatic and symbolism-laden US visit came amid increasingly close ties between Solomon Islands and China, and almost two decades after shutting its Honiara embassy, which it now plans to reopen.

“The U.S and Pacific Island nations, including Solomon Islands, share profound ties with each other,” Ms Sherman told the media.

“Those ties are shaped not only by our shared experiences in the Second World War, but by our geography, our ongoing economic relationship, and above all our shared culture, values, and commitment to addressing the challenges we face in partnership and friendship.”

After meeting with prime minister Manasseh Sogavare, Sherman announced US$1m ($1.4m) for UXO clean-up, adding to the US$6.8m (AUD$9.8m) spent in the Solomons since 2011.

“If I lived here and I was worried every day that one of my kids might step on a landmine, I would want every single bit of unexploded ordnance to be gone,” she said.

“So I totally understand the concern, and it is a deep commitment by the United States and all of our partners and allies to do so.”

The Australian Government’s Operation Render Safe has neutralised more than 1,000 UXOs in more than a decade working in Solomon Islands.

While in Honiara for the commemorations, Australia’s Minister for International Development and the Pacific, Pat Conroy, inspected the Hell’s Point disposal facility, a former U.S World War Two munitions dump, as well as police who are receiving training under a $15m (US$10 million) Australian aid programme.

“We fund just under a half-million dollars of [UXO] operations each year, we’ve got Defence personnel embedded and we are committed to the Solomon Islands being a regional centre of excellence for unexploded ordnance,” he told SBS News.

He said Australia would help “repair that curse that has been inflicted on Solomon Islands at no fault of the people”.

“They spend trillions of dollar to build weapons to kill people,” Henry says.

“It makes you feel angry they could be spending that amount of dollars and they only give you a few million dollars to clean up.

“It should be their priority to clean up.”

Apart from government support and compensation for the victims, relatives believe new hospital facilities would benefit everyone.

The antiquated and dilapidated national hospital known as “Number Nine”, built on the site of the US 9th Army field hospital during World War Two, is where the blast wounded were treated.

“If we had an intensive care unit at the national referral hospital and medical experts in bomb injuries, I think Raziv and Charles would have been saved,” Billy says.

“No one should experience what we have had to. I don’t want it to happen again.

“Something needs to be done.”

In March, Japan supported UXO clearance operations in Solomon Islands with US$787,815 in aid to supply specialist equipment to address the “important and urgent issue” together with the U. S and Australia.