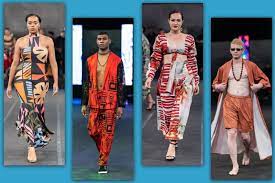 By Rajan Sami in Suva

The hopes of Fiji’s fledgling fashion industry sit on the slim shoulders of a 25-year-old from Muaninuku Village named Laisiasa Raibevu Davetawalu.

The young designer has done what so many in the Pacific country have dreamed of but not had the opportunity to do.

Sponsored by the entire Fiji fashion community, which recognised his promise and raised money for his fashion school fees, he has completed training at the Fashion Design Studio at Tafe NSW in Australia, making him one of the few Fijian designers to have been able to access professional training.

The strength of his recent graduate collection, a sensuous summer womenswear wardrobe with nods to Fijian design traditions, landed him in the pages of Australian Vogue and a job as a junior garment technician at Zimmermann, one of Australia’s most successful fashion labels.

“I’m proud of my heritage and want to represent Fiji on the world fashion stage,” he says.

Alongside his job at Zimmermann, Davetawalu has his own label Elaradi – a play on his initials, LRD.

In May, he brought an expanded version of his graduate collection from Sydney to Suva for the closing show of Fiji Fashion week, where it was received by cheering fans, well-wishers and supporters.

“Lai showed promise from the moment he debuted his first collection as a student designer,” says Hosanna Kabakoro, a fellow designer, who makes resort wear under the brand name Duatani, Fijian for “something different”.

“Promise is something we see a lot of here, but that rarely gets the opportunity to grow beyond that potential.”

And grow he did, showing diaphanous chiffon, complex corsetry and hand-knotted dresses that would look at home on a yacht anywhere from Ibiza to Barbados.

“He may be our first Fijian designer to truly appeal to a general overseas market,” says Kabakoro.

Davetawalu’s designs made subtle nods to Fijian cultural influences. One fringed, mock-neck dress, shot for Australian Vogue’s annual portfolio of new fashion graduates to watch, featured intricate hand-knotting that took him four months to complete. It was the antithesis of fast fashion.
To Fijians, the knots and fringing on the dress mimicked magimagi, a hand-woven rope made from coconut fibre that is used in fish nets, canoes and traditional architecture.

Other, floating silk chiffon pieces seemed to nod to traditional Indian dress, commonly seen across Fiji, due to the large Indo-Fijian population.

Not that long ago Davetawalu was sketching designs and reading fashion magazines while other boys played rugby at Queen Victoria school, a rural all-boys boarding school renowned as a bastion of indigenous masculinity that has produced many iTaukei (indigenous Fijian) leaders.

“I was bullied a lot because I’m gay,” says Davetawalu. “They would say: ‘Why are you always designing dresses? Why not do something in a masculine way?’ One morning I ran away and I never went back.”

Davetawalu took a two-hour bus from rural Lawaki to downtown Suva, where he went looking for the Fiji Fashion Week office, which had advertised a student design contest.

He entered the contest but didn’t win. With the support of his relatives, Davetawalu found a local school to go to and later presented his full first collection.

A number of fashion industry insiders including Christine Evans, an Australian fashion designer then based in Suva, and Ellen Whippy-Knight, the indomitable founder of Fiji Fashion Week, noticed Davetawalu’s talent and took him under their wing.

Veteran Australian fashion educator Nicholas Huxley, who first encountered Davetawalu when he ran a mentoring programme in Suva, calls him “the real deal”.

“He’s rather extraordinary and has an innate ability to look beyond the normal idea of putting a garment on a body,” he says.

Whippy-Knight aims to put fashion at the forefront of the cultural conversation in Fiji. She has pushed for local fashion education and other initiatives to benefit the industry, such as the establishment of a fashion council, an incubator for budding designers and greater state support.

She has mounted annual runway shows since 2007 as a platform for emerging designers like Davetawalu to showcase their craft, and find buyers. As a result, a number of local designers – such as Samson Lee, Moira Solvalu and Michael Mausio, all of whom specialise in bold prints – have gone from showing at Fiji Fashion Week with no formal design training to developing viable, albeit small, businesses.

The country’s fashion scene has also emerged as a safe space for LGBTQI+ people to find community and express themselves without fear of retribution.

Colourful indigenous prints are what makes Fijian fashion unique. To the Fijian and Pacific Island wearer, they signify culture, identity and belonging, but local designers have had less success adapting these prints for Fiji’s tourism market, which receives close to a million tourists annually.

The prints hold global potential; that has already been exploited by outsiders. A decade ago, sportswear giant Nike teased a line of printed women’s leggings inspired by Fijian, Samoan and Maori tattoo designs; and in 2013 now-defunct New York women’s wear brand Nanette Lepore came under fire for cultural appropriation after using a Fijian masi design (and mislabelling it as ‘Aztec’). Both companies pulled these products in response to outcry from Pacific communities.

For Davetawalu, the path from student designer to a fledgling professional who dreams of one day having his own label has not been easy.

There was the matter of paying for design school as an international student in Australia, which cost AUD$70,000 (US$48,000). The Fijian fashion community pitched in: Whippy-Knight provided Lai a place to stay at her home in Sydney while the Fijian Fashion Foundation hosted annual fundraisers to pay his school fees, raising roughly AUD$15,000 (US$10,302) a year over four years.

Today, he is one of few Fijians with formal fashion design training. This is despite a local garment manufacturing industry worth FJ$100m (US$50m) which produces general apparel from sportswear to uniforms for Australia and New Zealand.

A number of Fiji-based factories also make fashion garments for brands such as Kookai, the trend-oriented women’s brand co-owned by a Fijian-Australian; Bimbi and Roy, a women’s intimates brand founded by two Australian sisters who grew up partly in Fiji; and Scanlan and Theodore, an established high end womenswear brand with over a dozen boutiques in Australia.

Despite local fashion manufacturing capabilities, there is a profound disconnect between the apparel industry and Fiji’s fledgling fashion design industry. The latter faces a number of constraints, including a lack of access to formal education and training, incubation and mentorship, quality fabrics and financing, as well as greater state support of the industry.

“Our people are naturally creative,” says Whippy-Knight. “We have a strong tradition of craft and making things with our hands. A proper fashion school for Fijian and Pacific designers is what we need.