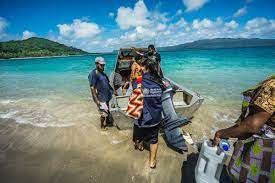 -Vanuatu has become the most recent country in the world and the first Pacific island country to eliminate trachoma, a neglected tropical disease (NTD) that can cause blindness.

This will be the second NTD eliminated from this archipelago nation of 83 islands, after lymphatic filariasis in 2016.

“This is a proud moment for Vanuatu,” said Minister of Health Bruno Leingkone. “My Ministry of Health colleagues and I feel honoured to have been part of this joint effort, which has involved medical and public health personnel and communities working together with the support of partner organizations to eliminate this disease. This combined effort has already saved hundreds of people from lifelong blindness and will have continued impacts on the vision and overall health of people across Vanuatu long into the future.”

WHO Director-General Dr Tedros Adhanom Ghebreyesus congratulated Vanuatu: “This success demonstrates the strong commitment of health workers, communities and governments to protecting their people and ensuring healthier lives for all.”

Trachoma is a public health problem in 43 countries worldwide, responsible for causing irreversible blindness or visual impairment in about 1.9 million people. The disease is caused by infection with Chlamydia trachomatis bacteria.

Vanuatu’s success underscores the comprehensive nature of the WHO-recommended SAFE strategy for trachoma elimination: Surgery for trichiasis; Antibiotics to clear infection; and Facial cleanliness and Environmental improvement to limit transmission. The country has steadily, methodically and rigorously implemented these measures, ensuring that the most marginalised and hard-to-reach populations are included in mass drug administration, surgical outreach for advanced cases and health education, along with initiatives to mitigate environmental risks and continuous efforts to gauge programme efficacy and appropriately target resources.

“To understand the magnitude of this feat, just imagine what it must take to reach people across all of Vanuatu’s inhabited islands – taking boats across open ocean and walking for hours through creeks and over hills in all kinds of weather,” said WHO Regional Director for the Western Pacific Dr Takeshi Kasai. “My heartfelt congratulations go out to Vanuatu for this tremendous achievement. It shows what is possible when we work together to reach the unreached with essential health services.”

Baseline epidemiological surveys conducted in 2014 demonstrated that 12% of children aged 1–9 years in Vanuatu had active (inflammatory) trachoma, prompting the launch of a national programme.

Since then, the Government has vigorously pursued the trachoma elimination target, despite challenges related to the country’s geography and the COVID-19 pandemic. Their efforts have been supported by partners, including WHO, the Fred Hollows Foundation, the London School of Hygiene & Tropical Medicine, Soap Aid, the Queen Elizabeth Diamond Jubilee Trust, the Commonwealth Fund of the United Kingdom of Great Britain and Northern Ireland, and the Australian NGO Cooperation Program. The International Trachoma Initiative at the Task Force for Global Health are the stewards of Pfizer’s azithromycin (Zithromax) antibiotic donation programme.

The global road map for neglected tropical diseases 2021–2030 calls for the eradication, elimination of transmission and elimination as a public health problem of several NTDs.

So far, 46 countries and areas around the world have been recognized by WHO for achieving one of the above goals for at least one NTD.

“We applaud the commitment of the Government of Vanuatu to the elimination of neglected tropical diseases including trachoma. Vanuatu’s elimination of trachoma as a public health problem is an important reminder that elimination of many NTDs is not only an important goal, it is absolutely achievable,” said WHO Representative to the South Pacific Dr Mark Jacobs.

Globally, 14 countries including Vanuatu have eliminated trachoma as a public health problem. Vanuatu is the fourth in the WHO Western Pacific Region, joining Cambodia, China and the Lao People’s Democratic Republic.

Trachoma remains endemic in eight countries in the Region. WHO calls for health authorities in those countries to take action to eliminate trachoma as a public health problem by 2030.