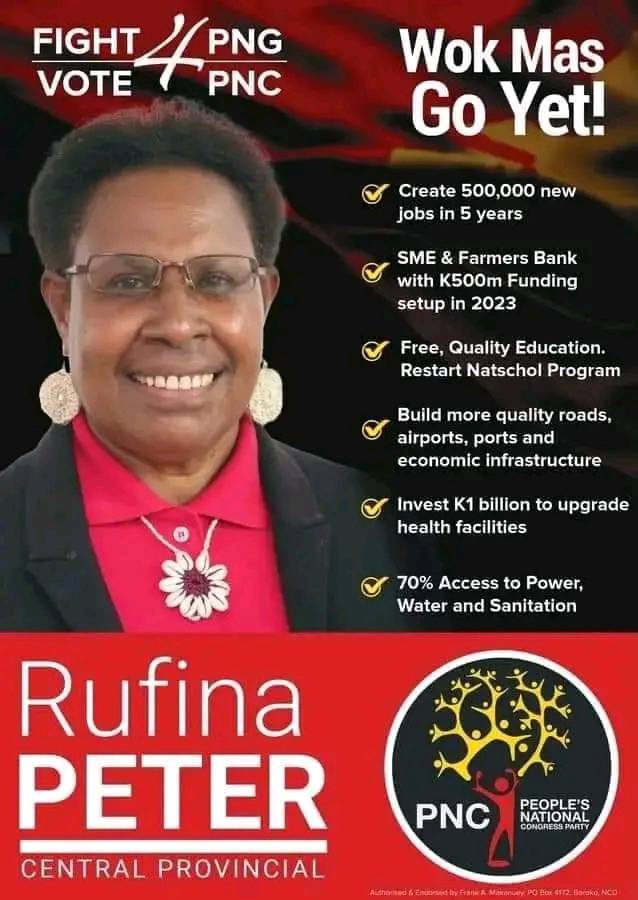 If there is a glimmer of hope in Papua New Guinea’s violence strewn National General Elections, then it has to be the elevation of a lone woman to the National Parliament.

It took the PNC’s Governor-elect of Central Province, Rufina Peter, three attempts to wrest power away from Pangu’s Robert Agarobe at the close of counting last week.

The race went down to the wire and Peter rode home on the weight of second and third preferential votes from eliminated candidates to unseat Agarobe.

In another major development, the people of Madang are on the cusp of sending a second woman to join Peter in Parliament.

In the remote district of Rai Coast –– famous for hosting a Russian anthropologist a century ago – jittery voters are keeping their fingers crossed as distribution of preferences was taking place over the weekend.

These are the same preferences that elevated Peter and given Sawang’s strong lead in the first half of the count, the preferences are the hope to push Sawang towards the finish line.

Last Friday, she was in second place on 5086 votes after the proverbial first preferences were completed from defending MP Peter Sapia’s LLG area, pushing Sapia to 7127 votes.

Counting of preferential votes is continuing at a snail’s pace in Rai Coast as the coasties hold their breath. More than 62,361 people of Central Province cast their vote on Peter, who polled 3444 more votes against incumbent Agarobe.

She said at her declaration on Friday night that she was aware of the magnitude of politics played out on the floor of parliament, the tasks ahead of her, the wrestling she will do to get Central Province and give her people what they deserve.

An economist and Goilala’s first female politician, Peter a People’s National Congress Party member elect is now the first woman to be declared in the 2022 National Election.

Peter admitted that being elected as the political head of a province came with great responsibility and she was confident she could deliver to her people by working as a team.

PNC leader Peter O’Neill was first to congratulate the Party’s “iron lady” singling out that her declaration was a proud moment for the party.

“Rufina Peter’s declaration is a proud moment for our Party. She fought hard and stands strongly for those she represents. It is a pity that the ferocity and aggressive nature of this terrible National General Election has sidelined a record number of female candidates,” O’Neill said.

In an interview over the weekend, Peter said Central Province had many educated elites who were instrumental in building the nation on the eve of independence.

“…in my five years, I will make that happen again while in office, I will carry my people’s plight, I will fight for our women, our children and the underprivileged,” she said.

Peter assured the people of Central and PNG women that she stands ready to work with all members-elect in Central and the provincial administration, to serve her people in the five districts.

The new Governor also thanked her predecessor Robert Agarobe for leading and governing Central Province over the past five years.

She dedicated her victory to God, the women of Central and male champions of women empowerment.

She acknowledged all security forces and electoral officials for delivering the elections in trying circumstances, and also praised the PNC party for believing in and endorsing her to run under its banner.

Meanwhile, any women can win any election they do not need special seats in Parliament, says Prime Minister James Marape.

He said that the elected Central Governor Rufina Peter stood on her own merits and was voted in by the people.

“We are ready to support any women who wish to make the change in the next election. Peter has shown that you can win any election with any support,” Marape said.

“Women don’t need special seats, all women who stood in this election did well.

Yes, we need to make changes in how the election is run but Peter has set the bar so did the three women MPs in 2012.

“She (Governor Peter) has shown that woman can win on merits. We don’t need special seats for woman and if woman want to contest, this coalition gives assurance for a better electoral process in 2027.

“That is one of the key resolutions we have agreed upon as far as the body of leaders, all of us came out of issues.

“We want to have a better system, biometric system and definitely an electronic voting system in 2027.

“This will be part of the substantial reforms we do our democracy and I look forward to more woman contesting in 2027.
“It is exciting to have a woman in parliament.

“My message to the females in the country is, do not lose hope. We will better the electoral processes. My party endorsed 10 women and I spent time on their campaign.

“Not one of them came through though I had high hopes for one or two, I am preparing them for 2027.

“To Rufina Peter, although she took the seat from one of our party MPs, nevertheless the people have spoken, and the outgoing governor is a man of total distinction to service to his country.

He wished the incoming governor the very best. “We look forward to working with her regardless of where she is sitting,” Marape said.

“Governors are very important leaders in the country and this government will give time to our governor’s provisions.

“They are important and anchor the nuts and bolts of the country.

‘Return of writs cannot be extended’: PNG Secretary for Justice