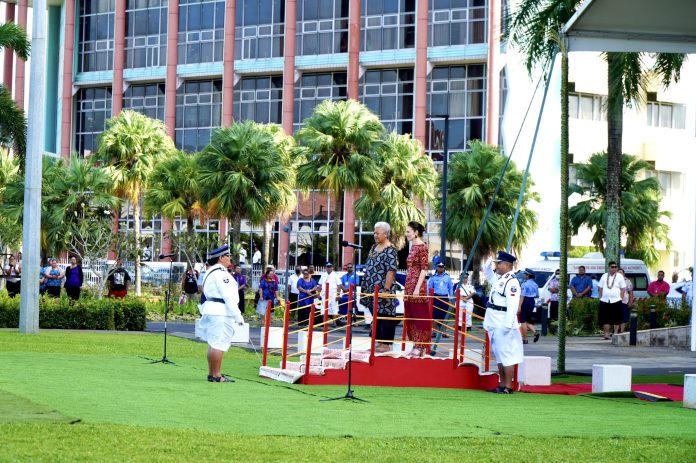 The lifelong friendship between Samoa and New Zealand, was cemented by a Treaty of Friendship signed 60 years ago yesterday, between Samoa’s first Prime Minister, Mataafa Fiame Faumuina Mulinuu 11 and then New Zealand High Commissioner J.B.Wright.

Last night, the two countries celebrated not only the 60th anniversary of the Treaty of Friendship signed at the same place, Vailima, but a year-long celebration of Samoa’s 60 years of independence.

New Zealand’s Prime Minister, Jacinda Adern is leading a delegation to the celebration and Samoa’s Prime Minister, Fiame Naomi Mataafa acknowledged the cultural and political diversity of the delegation which she said “added to the richness of our experience and what is shared as people of the Blue Pacific and as steward of their Oceania heritage.”

Mata’afa referred to the significance of the Treaty of Friendship, which she said “will no doubt this visit will pass permanence in our minds.”

Prime Minister Jacinda Adern said the Treaty recognises that there is an intimate relationship between the two independent states and the bonds that exist, provide and continue cooperation and opportunities for social progress.

She said both Aotearoa and Samoa has enriched each other in many ways, and that there were times the treaty has not always been plain sailing.

“The bond of friendship developed under the Treaty enriched lives and will live on,” she said.

She acknowledged Samoa’s stance in upholding its Constitution, Christian values and the rule of law and that she felt honoured to be standing at a place the Treaty was signed by the first Prime Minister of Samoa 60 years ago.

As Samoa’s first woman Prime Minister, Mata’faa said she was privileged to be part of such a milestone celebration.

“I feel emotional as this will be the second time this year that legacy has repeated itself, because on the 1 June 60 years later, I have the honour to raise the flag of independent, repeating the part accorded to my father the first Prime Minister of Samoa, Mataafa Fiame Faumuina Mulinuu 11 in 1962.

“Today, I am again at the helm of the 60 year anniversary of the Treaty of Friendship after the original signing in 1962,” she said.

She said for her generation, the memory of the Treaty signing remains in archive records and that the Treaty marks new relationships between Samoa and New Zealand and it is only one of its kind New Zealand had signed with any other country in the world.

“The relationship was founded on respect for human rights, purposes and principles of the Charters of the United Nations and that there is recognition that the close relationship between the two independent states is based on friendship, confidence,” said Mata’afa.

“We reaffirm Samoa’s commitment to the Treaty as we have a shared history and our journey in the last 60 years, and we pay tribute to our ancestors and fore-bearers who build a sound foundation for bilateral relations that is endurable, tolerance, complementary and understanding a relationship that is mutually respectful, honest and trusting,” said Mata’afa.

She also gifted PM Mata’afa with framed pictures of her late father signing the Treaty and raising the flag of independence in 1962.

Both leaders then cut the cake to celebrate the event.

Prime Minister Arden’s visit was also the first flight to arrive on the opening day of Samoa’s borders after two years lockdown due to Covid.