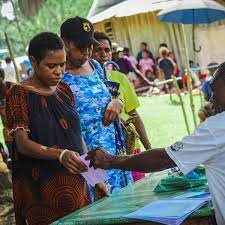 By Miranda Forsyth and Gordon Peake

Elections in Papua New Guinea are notoriously volatile and dangerous. But this year’s elections have involved violence, intimidation, corruption as well as administrative ineptitude on what looks like an exceptional scale.

The Commonwealth observer team on the ground has called for an urgent review of the electoral process, noting almost half of eligible voters may have been disenfranchised.

Yet the Australian government’s response – like the international community’s as a whole – has been muted, just as it was during the last elections in 2017.

The dominant narrative is that this wildfire of violence is something anomalous, that things will return to normal soon, and the business of government will restart. But is this a lie we have for too long chosen to believe?

The past few weeks have seen wildfires of election-related violence throughout parts of the country. Counting centres at two districts in Morobe Province, have been attacked. Voters in East Sepik and Hela provinces have destroyed ballot boxes and set fire to ballot papers. In Enga province, 18 people were killed by gunmen during voting. Accounts of killings and arson are in addition to the widespread reports of electoral chaos, of money politics, of ballot boxes being “high-jacked” by candidates and their supporters, and of scrutineers being harassed and hindered in doing their jobs.

Speaking at a public forum on Thursday, Dame Meg Taylor, a senior PNG leader, recounted a story of women in a village in the Highlands who got up early to vote, waiting patiently at polling booths hours before the officials arrive. They went early so as to be able to vote safely and without intimidation of the crowds, but even these precautions failed as they were chased away by a group of armed young men.

The country’s political leaders simply do not appear to be taking this seriously. James Marape, the country’s caretaker prime minister, held a press conference earlier in the week where he referred to “disturbances” and “unrest”, instead of acknowledging what it was – uncontrolled rioting, wanton violence, reports of bodies being dumped, photos circulated of rape victims, vehicles being attacked by crowds of teenagers, and so forth. In a statement released by the PM’s office, Marape said he was “on top of these issues”.

There is deep distress being voiced by Papua New Guinean citizens about what this violence is revealing about the state of democracy and the rise of tribalism and patriarchy in their country. Some are concluding that a tipping point has been reached, a point of violence and insecurity that was unthinkable when the country first celebrated its independence almost 50 years ago.

The violence associated with these elections is deeply implicated with the country’s institutions of governance. Last week the commissioner of police observed that it was the candidates themselves who were responsible for instigating electoral-related violence in Enga. He observed that it is “sickening” that the violence is stemming from highly educated members of the community.

We write these sentences with sorrow. We are Australians with a long-term interest in PNG. We have enormous respect for Melanesian approaches to governance. We have written about the resilience of Melanesian social structures to overcome the deficiencies of its frequently hollowed-out and sluggish state institutions. In our own work, we have highlighted the innovative and Herculean ways in which struggling bureaucrats and administrators in public institutions keep on going despite mounting resource constraints.

But we also know that what is going on is a manifestation of problems that have been hiding in plain sight. This violence is the result of the failures of multiple systems of governance over multiple years to adequately provide basic services and administration.

The events of the last weeks have forced us to ask uncomfortable questions: have PNG’s institutions of governance been so eroded, and so lost people’s trust and respect, that people feel they have no option but to take matters into their own hands? Has it got to the point where losing candidates will send their supporters out to occasion further wrack and ruin? What does this say about the future for democracy in PNG?

There is a danger that the political violence will be used by new leaders to justify a more oppressive response from the state, giving rise to dangerous cycles of escalation. This must be resisted.

It is critical that Australian leaders engage seriously with the events of the past few weeks, and speak frankly about them to whichever new leader emerges. The true levels of disenfranchisement of the population should not continue to be ignored. A new electoral system is urgently required. This must be one that both accounts for the entire population – the last census was done in 2011 – and that builds in a guaranteed place for women in the political system.

Many other changes are required to rebuild or re-craft broken systems of education, health and justice that have slowly been withering away. This will be a long process, but there is a very great risk that it will not even be started unless courageous leaders from both inside and outside PNG acknowledge the magnitude of what is currently unravelling.

Gordon Peake is an affiliate at the centre for Australia, New Zealand and Pacific studies at Georgetown University