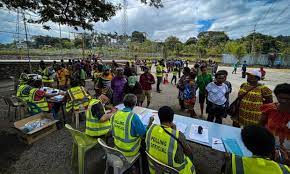 Voting in Papua New Guinea’s elections has been overshadowed by outbreaks of violence including the massacre of 18 people in the Highlands and a group of men attacking people with machetes outside a counting centre in Port Moresby.

Voting began at the beginning of July and continues until the end of the month. But what has caused the violence and what can be done to stop it?

How violent is this election compared to other PNG elections?

So far there have been roughly 50 election-related deaths this year, 28 during pre-polling and 22 since voting and counting started, said Maholopa Laveil, an economics lecturer at the University of Papua New Guinea, who studies elections in the country.

During the 2017 election, there were around 200 deaths, with 70 occurring pre-polling.

Bal Kama, adjunct assistant professor at the University of Canberra, says that while the death toll this year may not end up being as high as in 2017, videos and images of the violence have been shared widely on social media, which “really brings home the seriousness of the situation”.

What has prompted the violence?

There are some legitimate grievances about the electoral process, particularly around the issue of the electoral roll, which has not been properly updated since 2012. This means many of the hundreds of thousands of people who have turned 18 since 2012 are not registered to vote.

Laveil says an estimated one million voters may have been disenfranchised as a result.

“A lot of eligible voters were turned away. A lot of candidates were unhappy with that and then there was violence,” he says.

Mihai Sora, a research fellow in the Pacific Islands Program at the Lowy Institute, says there are legacy issues between ethnic and cultural groups in PNG – a hugely diverse country of around nine million people and about 800 different language groups – that can flare up around election time.

“These frustrations can boil over, there can be individual disagreements between supporters of different candidates, that also connect to existing tensions and conflicts within communities that trigger violence and then … that violence escalates.”

Papua New Guinea is very decentralised, which means that local MPs play outsized roles in representing their communities and ensuring their development.

“There’s a lot at stake for a lot of these communities,” says Sora “so it is a much more sensitive time than you might see in Australia where … people rely on established national and state level processes and they don’t necessarily rely on that direct local member.”

What has been done to deal with the violence?

The PNG government has deployed around 500 security personnel to Enga province, where the massacre was reported last week. They have also moved vote counting to safer areas, and tried to count votes and declare results as quickly as possible.

Before the start of the voting, the PNG electoral commission identified a number of hotspots where they feared violence could break out. But Laveil says the government did not do enough because there are more voters this time around. .

Funding shortfalls for the security apparatus meant personnel could only be deployed for limited periods of time and police were often playing catch up, rather than able to prevent violent attacks from occurring.

What is Australia doing?

It is standard for Australia to provide support for PNG during elections and in June it sent 130 defence force personnel to PNG to assist with “specialist planning, logistics and air transport support” for the election, but not security assistance.

Australia also printed the ballot papers and helped to distribute them.

But Sora said it was difficult to assess whether Australia should have dome more, especially in security.

“It’s kind of a tricky place for Australia to be in a sense of how it calibrate its assistance. In hindsight, now that we see these incidents of violence… you can say that, maybe we could have had a security contribution in those areas to avoid that violence.”

What does this mean for the result of the election?

The lack of security, reports that some polling booths were taken over by particular candidates, and accounts of counting officials being bribed or coerced have all cast doubt on the result, said Laveil.

“You’ve got children going into vote, you’ve got people voting on behalf of families and on behalf of communities and villages. And then you’ve got extra ballot boxes coming in,” he said.
But it should not be taken as evidence of a nationwide conspiracy, but rather of opportunistic candidates in particular seats. “There’s a lot of talk that [a particular party] has rigged the election; from our view [the party] has not rigged the election, it’s candidates in different seats taking advantage of a poorly administered election to really commit a lot of electoral fraud.”

Sora agrees. “We’re getting some really dramatic scenes play out. But it’s a huge country and there are a lot of places where the election is working smoothly, where materials have arrived on time and people have voted and it’s been peaceful. So you don’t want to go whole apocalypse.”

What can be done to make the next election less violent?

Laveil said the government had been warned “to get its roll straight, to get more security, get the voting and the counting process more straightened out”, but it had not responded. “A lot of the blame can be laid at the government’s feet,” he said.

Kama says the next government had to make electoral reform a priority as it headed towards its 50 years since independence from Australia in 1975.

“We expect the country to be heading somewhere and this violence… has caused a big shadow on these aspirations. So the new government needs to really think about how can we go from here.”..