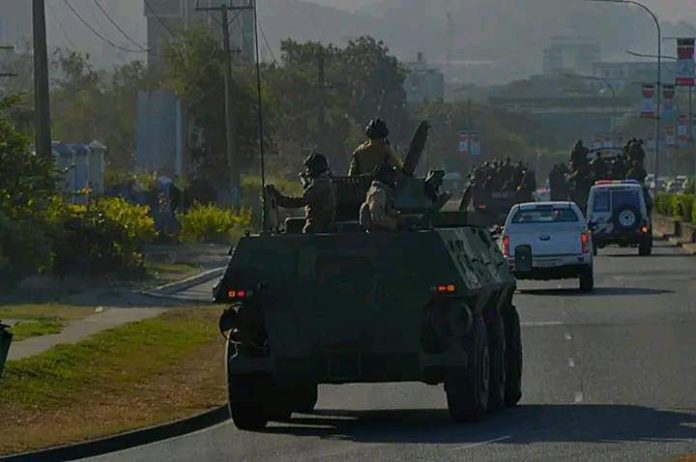 Terrified Port Moresby residents have welcomed soldiers in armoured vehicles on the streets of the capital after two days of chaos and fear created by machete wielding supporters of political opponents.

The National Security Advisory Council ordered 100 men from the 1PIR Taurama Barracks onto the streets after clashes between knife wielding opportunists send frightened citizens packing and turned sections of the city into a battlefield.

Buses, PMVs and private vehicles stayed off the streets as businesses also shut down for the day while schools remained closed.

Three days remain before the return of writs on 29 July which officially end the National General Elections 2022.

The 100 soldiers will be put part of police efforts to patrol the city as counting continues and will be part of the security contingent after the Return of Writs until Parliament sits on Thursday 04 July at 10am.

Police Commissioner David Manning, who flew in from Western Highlands Province, said that he had asked for assistance from the PNG Defence Force through their commander Major General Mark Goina.

“PNGDF are only assisting to beef up manpower as we continue to monitor the situation in the city of Port Moresby,” he said.

Caretaker Prime Minister James Marape said that the incident of Sunday only highlighted the need to ensure security across the country continued even after the Return of Writs on Friday 29 July, 4pm.

“We will ensure all security personnel across the country are resourced and that means military will assist in policing the city,” he said.

“I have been advised that security in the city will be on duty with roadblocks to be conducted to ensure any vehicles found with dangerous weapons, or other dangerous items are removed to stop any further escalation of violence.”

Assistant Commissioner of Police-NCD/Central Anthony Wagambie Jr said: “Roadblocks are there to ensure that the travelling public is taken care of and there is no one carrying around any weapons of any sorts to incite any violence.

“We do not want any violence of any kind to disrupt the counting of all electorates in NCD and Central province, we will continue to maintain and monitor the city and central province with the assistance of the PNGDF,” he said…PACNEWS

Meanwhile, Papua New Guinea Prime Minister James Marape says there is no curfew to be imposed after the National Security Advisory Committee (NSAC) met at 3pm Monday to discuss not only the Port Moresby issue, but other issues that have disrupted the electoral process right across the country.

Marape said that the issues that have been highlighted does not warrant a curfew with a lot of reports found to be unfounded.

However, he confirmed that the military is assisting the police to keep the city safe.

He addressed media and the nation through a press conference right after the NSAC meeting.

“We are on top of all these issues,” Marape said.

However, Opposition leader and Vanimo-Green MP Belden Namah said: “I call for the immediate declaration of a State of Emergency and a curfew to be imposed in Port Moresby, Enga Province and in all the trouble zones throughout the country.”

He said the Covid-19 State of Emergency is still in force so I call for further options to be added to its provisions, including:

– Call out of the military to assist police,
– A dusk to dawn curfew in affected areas,
– Ban on all sale of machetes and other knifes and tools that can be turned into offensive weapons,
– Ban all carriage of machetes and other offensive implements in public,
– No travelling or congregation in groups, especially men and boys, and
– Closure of schools for two weeks, and
– Security checkpoints to be set up at all suburbs.

Marape said that support of the PNGDF warrants no curfew.

“Those who want to continue to cause disturbances to counting, as well as to the innocent society at large, will face the full force of the law.”

The recent election related violence in the nation’s capital has created a lot of anxiety with city residents, business houses and the international community and had attracted a lot of negative publicity in regards to how the government has been conducting the 2022 National General Elections in the country thus far.

According to sources from the PNG National Intelligence Office (PNGNIO), an assessment highlighted that tensions are still high among candidates and their supporters and that it is highly likely that the situation can spill before elimination and the declaration stages.

The PNGNIO also assesses that tensions will continue even during the period of return of writs and for the duration of the formation of government.

It is on that note that the PNGNIO recommends the following measures to be taken:

1.Impose of a curfew in NCD – 9pm till 6am to restrict movement of people.

2.Restrict gatherings of supporters of candidates at counting venues. All shelters and tents should be pulled down. Supporters should relocate to the candidates’ residences.

3.Restrict access to counting venues to only the candidates and key scrutineers. Numbers should be reduced.

Australian PM says there is ‘great concern across Pacific family’ over...