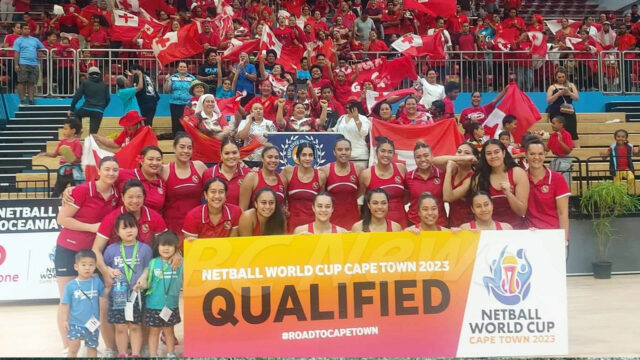 Tala consecutively won three of its games, firstly against Samoa 69-52 and then Fiji 59-29.

The team continued its winning streak, with a massive win against Papua New Guinea 89-28.

Oceania Netball has since congratulated Tala in their successful World Cup campaign.

“The Tongan Tala who have qualified for the Netball World Cup 2023 after defeating Fiji, Samoa and Papua New Guinea…with one more game against the Cook Islands, Tonga is on its way to Cape Town 2023.”

This would be also Tonga’s debut at the Netball World Cup in Cape Town, South Africa, starting in July 2023.

World Netball in their match reported in the game against PNG, that Tala was firing out the blocks scoring a flurry of goals to lead 6-30.

While, the second quarter was no different as Tala scored another 23 goals taking the score line to 12-53 in their favour by half-time.

“Tonga showed no sign of slowing in the second half either, continuing to move the ball with ease down the court and showing just why they are the only unbeaten team in the tournament.”

Meanwhile, Tala went into their qualifying campaign, as champions of the 2022 Pacific Australia Netball Series, after defeating Fiji earlier in March.