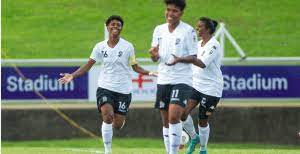 Host nation Fiji are through to the semi-finals of the OFC Women’s Nations Cup 2022 after overcoming a stubborn Cook Islands side at the HFC Bank Stadium in Suva, Fiji.

Goals in either half from captain Sofi Diyalowai and vice-captain Luisa Tamanitoakula secured victory for the Kulas in front of an excited home crowd.

Fiji won 3-0 when these two met at the 2018 edition of this tournament and they looked like producing a similar result after a dominant start.

Cema Nasau and Trina Davis scored in that 2018 fixture and both went close early on.

First it was winger Davis who saw her half-volley well saved by young Cook Islands shot-stopper Kimberly Uini. Nasau’s 20-yard strike was next, ricocheting off the post as Fiji piled on the pressure.

Victoria Fatiaki then had the Cook Islands’ best chance of the opening period before Uini found herself fortunate not to concede, having been closed down by Fiji striker Vanisha Kumar.

The Cook Islands resolve was finally broken by the once again outstanding Diyalowai. The Fiji skipper played a swift one-two with her midfield partner Nasau before slotting the ball under the onrushing Uini to give Fiji a well-deserved lead.

The Cook Islands gathered themselves at half-time and had an opportunity to equalise early in the second period. Fatiaki again had the chance but she could only lob her effort wide over the advancing Fiji goalkeeper Seruwaia Vasuitoga.

After Kumar saw her shot well blocked by Uini and Davis mistimed a golden opportunity to stretch Fiji’s lead it was one of Lisa Cole’s substitutes who eventually got the crucial second goal.

Tamanitoakula scored in the 2018 meeting between these two sides and the vice-captain did so again, firing home the rebound after Uini had saved Adi Bakaniceva’s close-range attempt.

Fiji will now face the winner of today’s other quarter-final between Tahiti v Solomon Islands in the semi-finals on Wednesday, July 27 while the Cook Islands’ journey has come to an end.

“It was a real professional win for us. Getting that second goal in the second half kind of put us at ease but I think the biggest thing is we kept the tempo of the game quick and fast.

“We played our game and that is what I was the most proud of to be honest.”

“I am very proud of them. Unfortunately it did not go our way but the girls fought hard out there and unlucky the goals were scored.

“The experience here has been great. Having the girls bond and keeping together has been awesome.”..