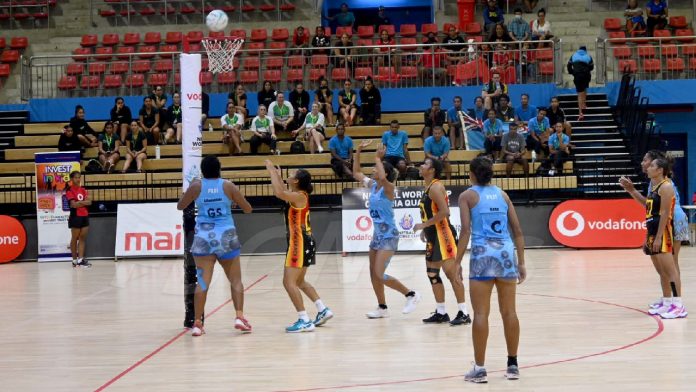 Our Pearls thrashed the Pepes 74-32 in game one of the qualifiers at the Vodafone Arena in Suva.

The national side was fired up from the first quarter with former basketball player and Pearls shooter Vilisi Tavui making sure of her shots at goal.

Veterans Maria Lutua Rusivakula and Unaisi Rauluni were in their best form as well as the hardworking defenders combination of captain Alisi Naqiri and New Zealand-based Kelera Nawai.

Fiji was leading 15-7 at end of the first quarter.

PNG was able to slot in seven more goals to increase the score to 14 but the Pearls were way ahead with 39 as the game went into halftime.

Rokoura made a number of changes in the third quarter with Afa Rusivakula coming in as goal shooter, Unaisi Rauluni as goal attacker, and Ema Maluvu taking over the goal keeper’s role from Nawai.

The Pepes started the third quarter strong, making the Fijian defenders work hard and their shooters were more accurate with their attempts.

The visitors who only had six weeks to prepare ended the quarter with 25 as Fiji took a healthy lead of 54.

The final quarter was as intense as it can get as the Pepes defenders made Rusivakula and Rauluni work hard in the circle.

However, the skillful Rauluni had the edge over them in the circle with pace, reach, and vision.
The win was undoubtedly in Fiji’s favor with the shooters slotting in 20 more goals.

Captain Alisi Naqiri says it was a good start for the team.

“Happy for the girls for the win today. We did what we trained for, for the last few weeks. The overseas based players blended in well today and we utilized all our turn overs today.”

In the second match of the night, the Tongan Tala defeated Samoa 69-52.

Fiji will take on Tonga at 7:30pm today in its second match.