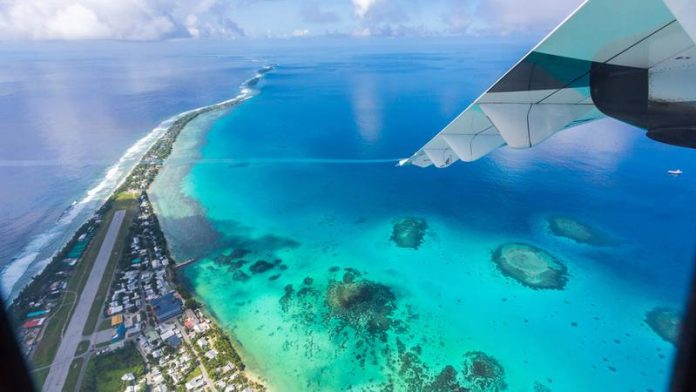 With climate change causing the sea to rise around them, the Pacific island of Tuvalu is calling on New Zealand to provide more support for their survival.

Tuvalu foreign minister Simon Kofe told Barbara Dreaver for Q+A that “more needs to be done” by bigger countries, and that “it’s an issue of justice” given the scale of emissions produced by countries like New Zealand and Australia.

“There are many projects that could do with more funding, like building seawalls, protecting our coastal areas, reclaiming land,” said Kofe.

The comments come ahead of the Pacific Islands Forum in Fiji, at which climate change is expected to be a major topic of discussion.

Tuvalu is among the most vulnerable countries in the world to rising sea levels, as it sits on low-lying Pacific atolls.

The country is also increasingly vulnerable to tropical storms, which are hitting with increasing frequency and intensity.

Kofe told Q+A that in the long term, it’s possible the islands will be fully submerged, and the country’s population will have to completely relocated.

“Do we still consider ourselves a state? Do we have the right to vote in some of these international bodies? Do we have claims to our EEZ [exclusive economic zone] and resources in our waters?” he asked.

“So we’re looking long term, and we want to ensure that we find legal avenues now to secure our statehood under international law.”.

In response, associate foreign minister Aupito William Sio said the Government had made a significant increase to the aid budget last year, particularly targeted towards the Pacific.
He said Pacific nations were preparing for the worst and having to move, but was also mindful of the fact that the people of those nations had a strong preference to stay on their own land.

“And therefore mitigation and adaptation – we’ve got to figure out how do you continue protecting those homelands?” said Sio.

Sio said that while the possibility of population migration was a complex legal area, the New Zealand Government continued to support the principle of sovereignty for Pacific nations forced off their islands.

He has recently returned from Fiji, after attending initial PIF discussions in place of foreign minister Nanaia Mahuta, who has had Covid.