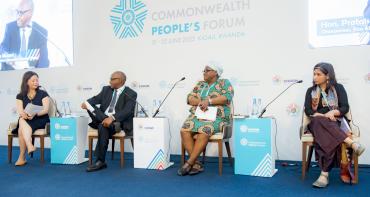 It’s the first time civil society in the Commonwealth has convened in four years at this scale, owing to the pandemic, with the discussion spanning how civil society can encourage Commonwealth leaders to build new agreements for collective action in the lead up to COP27.

“I have been a strong proponent of a World Environmental Court. Global challenges need global solutions. Climate change does not have borders, it transcends borders. We only have a very small room of opportunity to really reverse the impacts of climate change and environmental problems — and I think the legal avenues at the multilateral level are very limited at the moment.”

Dr James Fletcher, former Saint Lucian climate change negotiator who played a pivotal role in the adoption of the Paris Agreement at COP21, supported this in principle, but with caveats:

“I welcome any thought of an environmental court but I know judging from the kind of resistance to loss and damage, we will have problems. That said, civil society can help — because if we just leave it to the politicians to argue, compromises will be made and back deals will be made. We will not be able to do it on our own. We need civil society to champion this.”

Maxwell Gomera, a resource economist at UNDP and one of the leading proponents of a Global Green New Deal following the financial crisis of 2008, agreed civil society had a role to play:

“I’m delighted that civil society is taking the initiative here to start the conversation. We require thought leadership, new ideas, but also require new agreements for collective action across governments and society. The Commonwealth can broker these conversations. It can be a partner in thought leadership, for example, as 54 countries of the Commonwealth we are committed to ensuring there’s a decision about loss and damage in the court.”

Harjeet Singh, global expert on climate impacts, mitigation and adaptation from Climate Action Network, weighed in on why historically, climate action has failed to deliver:

“The good thing is over the last few years, we see that the terminology of climate justice has become more popular than climate action. People now understand that the challenge is the negotiations. When you talk about justice, you have to mention historical responsibility. We have to talk about who is responsible for the crisis, who is suffering and who has to do the most to deal with the crisis. This is a crisis that we have to deal with collectively. So countries or corporations who are responsible for it, have to take the bigger responsibility.”

Dr James Fletcher added that the time for negotiations is now — whether that’s in court or another multilateral forum — as small island states can’t afford more talk:

“So many small island developing states are disappearing. There are islands in the Bahamas, in the Marshall Islands, that will disappear. In Jakarta, cities are under threat. There is nothing you could do to adapt to that. There is no seawall that you could build to cause that to change. Somebody has to take responsibility for this,” he said.

Developing nations put numbers on the table for the next climate...