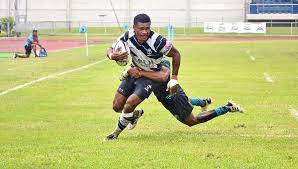 FRU will field two women’s and a men’s team in the tournament which also consists of three teams from New Zealand {All Blacks 7s, Black Ferns Ma and Black Ferns Pango}, two Australian and Papua New Guinea squads, and a men’s Tongan side.

Fijian 7s Head Coach Ben Gollings has named a strong 16-member squad for the three-day tournament which kicks off on Friday.

Gollings said “It’s an opportunity for us to get some game time again, try new combinations and develop more as a squad as we bought a few new players to gain some balance.”

Gollings has maintained his core squad for the Oceania 7s. Captain Tevita Daugunu will led the forward pack together with Elia Canakaivata and Semi Kunatani.

Backs such as Philipo Bukayaro, Waisea Nacuqu, Jerry Tuwai and Kaminieli Rasaku are expected to provide experienced hands to support our entertaining rugby.

Gollings said “I’m pleased with the way we are tracking. The players have been working really hard and it has been a huge week and they have responded very well.”

He said Rawaca has a lot of experience and has been doing well overseas.

“He came back to Fiji and he asked for an opportunity and from my perspective, I have always got the door open and it is up to the players how they take up the challenge” he added.

Gollings said they will use the Oceania Rugby Super Sevens as a medium to improve on certain areas.

“We will focus on the key elements such as on our combinations, developing new thought processes to the way in which we want to play plus try and polish up on the certain areas of the game. I’m sure if we do that we will get the result we want” said Gollings.

Fuli said “It’s good timing for us to have some sort of rugby as we head to New Zealand for the Oceania 7s.

We have 2 teams this week, the majority are all players that we have identified, developed, and mound them to play international competition.”

He said “Our aim this week is to have positive momentum in terms of the different departments of play. We will focus on the consistency of our restarts, ball in play and how we manage the game until the last whistle.

He further added “It will be a great opportunity for all our squad members to play against their Pacific sisters and get the best out of them as we build the right combination for the upcoming Commonwealth Games.”

“We are blessed with the number of talents that are playing in our local tournaments and we have managed to identify some great potential to join our depth chart” said Fuli.

The Oceania Rugby Super Sevens will be held from Friday at the Navigation Homes Stadium in Auckland.