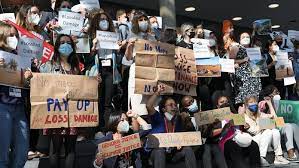 By Joe Lo and Chloé Farand

The EU has blocked developing countries’ call for a facility to distribute money to victims of climate disasters, despite finally recognising the need for this money to flow.

European and other rich nation negotiators believe they have shifted dramatically in recognising the need for funding in addition to that for carbon-cutting and adaptation efforts.

One developed country negotiator told Climate Home: “One year ago, I wouldn’t have been allowed to say ‘loss and damage’…a lot of progress has happened in the last year or so”.

But despite showing more willing to address the issue, the gap between rich nations and developing countries’ position remains glaring. During the Bonn climate talks, which closed Thursday, the EU led resistance to developing countries’ demand for a bespoke loss and damage facility and for that to be on the formal agenda at Cop27 in Egypt.

“The fact is that the EU is still unable to grasp the scale of harm that climate impacts cause in the Global South nor of its direct responsibility on loss and damage,” said Adrián Martínez Blanco, of the Costa Rican campaign group Ruta Del Clima.

Rich nations have avoided setting out an alternative solution to the loss and damage facility demanded by developing countries. Climate Home approached five wealthy country delegations in Bonn, none of whom wanted to discuss the issue on the record.

At Cop26, in Glasgow, UK, last year, developing countries were pressured by wealthy nations into settling for a three-year ‘dialogue’ on funding arrangement for loss and damage, with no decision-making powers.

Developing countries’s attempt to push the issue on the formal agenda for the Cop27 talks this November have so far been unsuccessful and consultations on the issue will continue. In response, they appealed directly to the UN climate head Patricia Espinosa to intervene on their behalf.

Under current plans, the discussions will remain a ‘dialogue’ which is due to end in June 2024. The next session isn’t planned until June 2023. Vulnerable nations say they cannot afford to wait two more years to have certainty on funding arrangements.

Alex Scott, of think tank E3G, said progress at the talks was “divorced from the climate impacts that are hitting on the ground outside this venue, outside these negotiations”.

However, some rich nations have been more forthcoming about promising hard cash outside of a funding facility.

New Zealand’s climate ambassador Kay Harrison told the meeting last week: “There should be no question – climate finance must be available to avoid, minimise and address loss and damage… we think the solutions may lie in bilateral, regional and multilateral solutions”. She added this needed to be done “urgently” and without “delay and procrastination”.

On Friday, a foreign ministry spokesperson told Climate Home that “New Zealand is developing a strategy for delivering climate finance to support our partners’ climate action, including addressing loss and damage”. If it happens, New Zealand would become the first UN-recognised country to provide explicit loss and damage finance.

Denmark’s chief adviser on climate diplomacy Frode Neergard said: “Current financing mechanisms do not recognise the urgency of loss and damage and the need to act now. It’s a drop in the ocean. Existing finance mechanisms are overwhelmed.”

A recent Oxfam report found that for every US$2 needed for UN extreme weather-related appeals, donor countries are only providing US$1. The World Food Programme recently scaled down its work in South Sudan because of lack of funds, leaving up to 1.7 million people at risk of starvation.

Alpha Kaloga, lead negotiator for the African Group on loss and damage, told Climate Home that besides from being insufficient, humanitarian aid and disaster relief doesn’t provide equal support to all countries, with some getting more help for geopolitical reasons. Friends and families of victims, often poor themselves, have to pick up the slack when aid money doesn’t cover needs, he added.

To address this funding gap, Germany, supported by the U.S, has proposed a ‘global shield’ which aims to provide targeted support to a select number of particularly vulnerable countries. It will push this idea when it hosts the G7 leaders’ summit later this month and the Petersberg Climate Dialogue in July.

But, throughout the talks, the U.S and the EU insisted that existing aid schemes could be increased and improved to address countries’ loss and damages needs.

“We think the next set of our process should focus on how existing resources can be strengthened,” the EU’s lead negotiator Jacob Werksman told the meeting.

Climate Home understands that, after years of avoiding the issue, the EU feels politically exposed by its recent recognition that loss and damage needs to be addressed with funding but its failure to provide an alternative to developing countries’ proposed facility.

Under the governance of UN Climate Change, they bloc argues the fund would be bureaucratic, slow to set up and won’t resolve the quality of finance, such as the share of loans versus grants. In private, some EU negotiators further recognise that there are no compensation mechanisms for slow-onset events, such as sea level rise, or the loss of culture, language and traditions because of climate impacts.

But not every capital is ready to face the consequences of ramping up existing aid. In fact, the UK has cut its development aid in the wake of the pandemic. “Every country has this fight between the climate ministry and the ministry of finance,” said the developed country official.

SPREP Members endorse key documents on conservation and the state of...