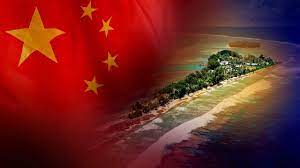 China’s growing influence in the Pacific is a “scary development” for the region, according to the former prime minister and current opposition leader of Pacific island nation Tuvalu.

In an interview with SBS News, Enele Sopoaga said a leaked document outlining China’s intention to form a pact with Pacific island nationsMcomes at an unstable time for the region.

“The decision to take the draft is up to individual respective countries in the Pacific. But I think this is a rather scary development that we are hearing about now,” he said.

The China-Pacific Island Countries Common Development Vision, a leaked draft document seen by Reuters, outlines a five-year action plan sent by China to 10 Pacific island nations ahead of a meeting with foreign ministers in Fiji on 30 May.

Sopoaga, who is also part of the Pacific Elders’ Voices – an advisory group for the Pacific region – said he agrees with the president of Micronesia who compared the rising tension between China and the West to the Cold War.

“Island countries are becoming like a canary in a coal mine,” he said.

“We are being used as canaries to politicise and sell cheap cooperation and support in the name of exerting influence.”

“We are dealing with a most serious threat to this community of the region, which is climate change, and our focus cannot be sidetracked by any other so-called joint collaboration or corporations in the name of economic development of fisheries, this would all translate into political influence,” he said.

The president of the Federated States of Micronesia (FSM), David Panuelo, said his country would argue the “pre-determined joint communiqué” should be rejected, because he feared it could spark a new Cold War between China and the West.

The document states China and the Pacific will “strengthen exchanges and cooperation in the fields of traditional and non-traditional security”.

“China will hold intermediate and high-level police training for Pacific Island Countries through bilateral and multilateral means,” the document reads.

The communiqué also proposes a China-Pacific Islands Free Trade Area, and support for action on climate change and health.

When asked about Australia’s relationship with Pacific countries, Mr Sopoaga said Australia needs to start listening to their needs.

“Australia, I think, needs to listen better. And I certainly hope with the Labor government coming into administration, they need to close that gap to fill up that vacuum.”

“People all from all other sides of the world are dropping by visiting. Naturally, that would happen if there is a vacuum. So I think I would urge the new government to improve, step up its understanding and listen to the voices of foreign countries.”

Dr Joseph Veramu, a consultant on economic policy planning and development in Fiji, said Pacific countries like Fiji who have existing close relations with both China and Australia have been left in a difficult position.

“If Fiji leans too much to China, it comes across as being illiberal. Australia has effectively dictated the economic and democracy message in the Pacific, and Fiji and other Pacific nations with ties to China’s Belt and Road Initiative are now left in a quandary,” he said.

Veramu said the relationship between Fiji and Australia has been the “best since 2006” and so the challenge now for Fiji’s government is to engage with both China and Australia to garner the best outcomes for the country.

“Fiji will want to cultivate the relationship with Australia and make the right noises with China.”
“I have read the draft China document and there are no military bases planned. Fiji should engage with China on investments and trade,” he said.

A drop in the ocean? Organised crime dynamics in Pacific Island...