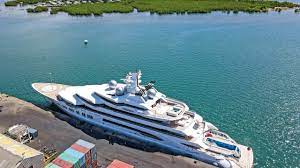 The vessel was taken into custody by local law enforcement when in berthed at the Lautoka Wharf last month.

The Appeal Court has ruled that the decision made by the High Court is affirmed and the Amadea is to be handed over to U.S law enforcement agencies.

The Court has also directed that the judgment is not to take effect or be implemented until seven days from notice to parties.

The United States last month made a request to the Fijian government to institute legal proceedings to have the Amadea handed over to the U.S.

The vessel is owned by Russian billionaire Suleiman Kerimov who has close ties to President Vladimir Putin, and has been sanctioned by various governments around the world