Transnational crime syndicates including those that work in the underworld market of money laundering would have been anxious over moves in the United Nations to add more teeth into its convention against corruption that first came into force in 2005.

This came early in June in New York at the convening for the very first time of a special session of the UN General Assembly focusing solely on corruption, and the adoption of a political declaration that carried the lengthy title of ‘Our Common Commitment to Effectively Addressing Challenges and Implementing Measures to Prevent and Combat Corruption and Strengthen International Cooperation.’

“We will take measures to prevent the financial system from being abused to hide, move and launder assets stemming from corruption, including when vast quantities of assets are involved. Those crimes undermine the integrity of the financial system, and we commit to promoting the implementation of the Convention and our respective applicable international obligations.”

The Declaration calls on member states to be tough on fugitives who seek refuge in their jurisdictions, as well as against public officials who are guilty of “abuse of functions and illicit enrichment.”

Sports should also be safeguarded from corruption, and UN member states must ensure that corruption safeguards remain intact in their COVID-19 pandemic responses.

“We will ensure that appropriate measures are in place to prevent and combat corruption when responding to or recovering from national crises and emergencies, while striving not to negatively impact the speed and quality of responses in such situations.

“In this regard, we recognise the role of supreme audit institutions and other oversight bodies and their functions in upholding policies and procedures for the management of public finances and public procurement, and the importance of partnerships between the public and private sectors and other relevant stakeholders, in accordance with domestic law.”

The Political Declaration also welcomes the creation of a new tool in combating cross-border corruption offences—the Global Operational Network of Anti-Corruption Law Enforcement Authorities, which will be housed under the United Nations Office on Drugs and Crime (UNODC).

The UN General Assembly Special Session Against Corruption also pledged to ensure general elections are transparent, free and fair and that the independence of the judiciary is upheld in its 18-page political declaration. 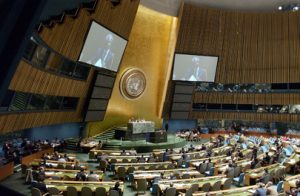 “We will maintain, strengthen, develop and implement measures that protect the integrity of the electoral process and promote its accountability to voters, transparency and impartiality in domestic electoral institutions and oversight mechanisms, and transparency in the funding of candidatures for elected public office, political parties and electoral campaigns, where applicable, with a view to preventing corruption, ensuring accountability, promoting good governance and reinforcing trust in public institutions,” states paragraph 12 of the Political Declaration.

The new UN declaration shares some of the aspirations of Pacific Island Leaders under the Teieniwa Vision. which they adopted in Tarawa, Kiribati in February 2020.

Like the Teieniwa Vision, the UN Political Declaration Against Corruption is big on ensuring national anti-corruption bodies are well resourced and notes that education and public awareness is key.

While the UN Political Declaration does not use the term whistleblowers, it specifies the many layers of support and protection UN member states ought to provide “to those who expose, report and fight corruption and, as appropriate, for their relatives and other persons close to them, and will support and protect against any unjustified treatment any person who identifies, detects or reports, in good faith and on reasonable grounds, corruption and related offences.”

Adds paragraph 31: “We will strive to provide a safe and adequate environment to journalists, and we will investigate, prosecute and punish threats and acts of violence, falling within our jurisdiction, committed against them.”

A surprising feature of the June’s UNGASS against Corruption was the absence of the Pacific, with no video statement of support from any Pacific leaders, nor a formal statement from their representatives in New York.

“There was no such decision taken by Forum members not to make any statement at the UNGASS against corruption,” Minister Kofe said in his email response.

“Unfortunately the meeting clashed with other meetings that the Forum members prioritised, like the UN PIF resolution, and the annual south-south cooperation meeting.”

“I am told as well that the special session against corruption did not allow for pre recorded statements which made even more difficult for PIF members to participate.”

Questions emailed to all the 12 Pacific island states’ UN missions in New York were not responded to by press time.

One NGO group, the UNCAC Coalition, was not too enthusiastic about the UNGASS political declaration against corruption, labelling it as “very modest advances”.

“Diplomatically-worded statements will not help the billions of people whose lives are damaged by corruption. We need leadership from the countries truly committed to preventing and fighting corruption at home and abroad,” said UNCAC Coalition Managing Director, Mathias Huter. The Coalition is a global civil society network of more than 350 non-governmental organisations committed to advancing the implementation of the UN Convention against Corruption (UNCAC).

The COVID-19 pandemic has exposed massive shortcomings in governance structures around the world, with aid money and public procurement funds being stolen or diverted to those with political connections, depriving millions of access to health care and urgently needed help.

The UNGASS declaration states that governments need to learn the right lessons of this global health crisis – and the economic and governance crisis that has ensued by:

•Strengthening public access to information, transparency of decision making, government contracting and spending, as well as ensuring the full disclosure of the direct and ultimate owners of companies and other legal entities;
•Guaranteeing an enabling environment for civil society organizations working on anti-corruption;
•Guaranteeing the protection and support of whistleblowers, investigative journalists, and anybody who uncovers and reports on corruption;
•Enhancing accountability mechanisms for public and elected officials;
•Ensuring that oversight institutions have the necessary powers, independence and resources to fulfil their roles effectively;
•Stepping up efforts to work with other jurisdictions to investigate, prosecute and hold accountable those involved in corruption, as well as those who facilitate it, such as brokers, agents, lawyers, accountants, auditors and banks; and
•Advancing the recovery and return of stolen assets in a transparent and accountable manner to repair the damages caused by corruption.