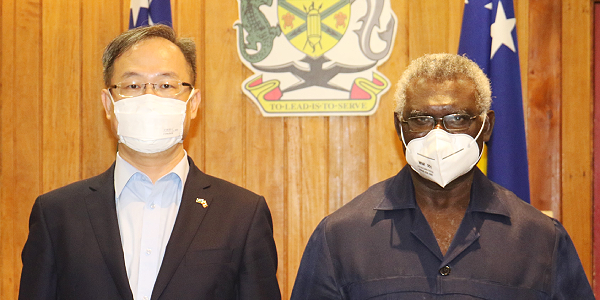 China’s foreign minister Wang Yi will visit the Solomon Islands this week and sign key agreements, expected to include a security pact criticised by the United States, Australia and Japan.

The Solomon Islands government and China’s ambassador confirmed the visit on Monday, with Prime Minister Manasseh Sogavare describing it as a milestone.

“Prime Minister Sogavare looks forward to a productive engagement with PRC as an important development partner at a very critical time in our history,” the government said in a statement.

Wang and a delegation of 20 officials from Beijing are expected to arrive mid-week and spend a day in Honiara, attending meetings and making a courtesy call on Sogavare. He will also hold a joint news conference with Foreign Minister Jeremiah Manele.

“The highlight of the visit is the signing of a number of key bilateral Agreements with the national government,” the government statement said.

While in the Solomon Islands, Wang will sign the security pact which has raised concern among Western allies, who fear it will lead to China gaining a military presence in the Pacific. The pact became a major issue in neighbouring Australia’s election campaign, with newly elected prime minister Anthony Albanese saying it would make his country “less secure”.

Beijing has said the security agreement will not impact regional security and covers only internal policing.

Solomons politicians have said trade agreements with China are also likely to be signed this week.

“We will always stand true to our policy of Friends to All and Enemies to None.”

Prime Minister Sogavare looks forward to a productive engagement with PRC as an important development partner at a very critical time in our history.

Leaders of the Quad of Australia, the United States, Japan and India are set to meet in Tokyo on Tuesday. They are expected to discuss the Pacific and announce an initiative to crack down on illegal fishing in the Pacific, using satellite tracking technology..

U.S won’t rule out military action if China establishes base in...