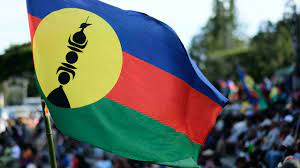 New Caledonia’s pro-independence FLNKS movement and five other small nationalist parties have agreed that they will only discuss the territory’s accession to full sovereignty in talks planned with France.

The joint position was adopted at the weekend at the Congress of the FLNKS and then a meeting involving other pro-independence parties – their first since last December’s independence referendum.

Just over 96 percent had voted against independence from France in the third and last referendum provided under the Noumea Accord, whose outcome the pro-independence side regards as illegitimate.

The pro-independence side said it would not recognise the result and contest it in international forums.

The plebiscite was boycotted by the pro-independence camp after it had unsuccessfully asked Paris to postpone the vote because of the impact of the Covid-19 pandemic on mainly the indigenous Kanak population.

The FLNKS Congress was also the first gathering of pro-independence parties since last month’s re-election of Emmanuel Macron as president of France.

An FLNKS spokesperson Wassissi Konyi said bilateral talks with France should be about the transfer of the remaining powers, relating to justice, defence, policing, monetary policy, and foreign affairs.

Konyi accused France of having stolen the referendum after joining the local political right to sabotage the exit from the Noumea Accord by refusing to postpone the vote to this year.

He said he wondered how Macron interpreted the fact that 56 percent of voters heeded the boycott call and didn’t vote in the referendum.

Reiterating his side’s stance since the referendum, Konyi insisted that it will not give up on the gains made in terms of decolonisation from France.

He said there could be no consideration to open the electoral rolls which restrict voting rights to indigenous people and long-term residents in provincial elections and referendums.

At the weekend Congress, the head of the USTKE union Andre Forrest said unity would be the compass to guide the pro-independence side as this matched the aspiration of its supporter base.

In March, the Palika party had suggested holding another independence referendum by 2024 to complete the decolonisation process, but this time with the participation of the Kanak people.

It added that the vote should be run by the United Nations, and not by France any longer.

In April, the Caledonian Union said it wouldn’t join discussions about re-integrating New Caledonia into France.

Its president Daniel Goa said his party had nothing to negotiate except to listen and discuss the process of emancipation that would irreversibly lead to sovereignty.

However, right after the December vote, the French overseas minister Sebastien Lecornu said Paris planned to hold another referendum in June next year about a new statute for a New Caledonia within France.

Lecornu added that there would be a broad consultation of civil society and the public for a stocktake and to hear about their aspirations after the rejection of independence.

Last week, several anti-independence parties rejigged their alliance, restating that New Caledonians had largely spoken out against independence and that they considered the decolonisation process to be complete.

In a joint statement, they said it was time for the pro-and anti-independence sides to negotiate under the auspices of the French state a political consensus for a New Caledonia within the French republic.

With fundamental positions still far apart, no timetable has been set for talks with France, which is a month away from its National Assembly elections.

Both camps in New Caledonia will contest the territory’s two seats in the Assembly, with the pro-independence side yet to name its candidates…. PACNEWS