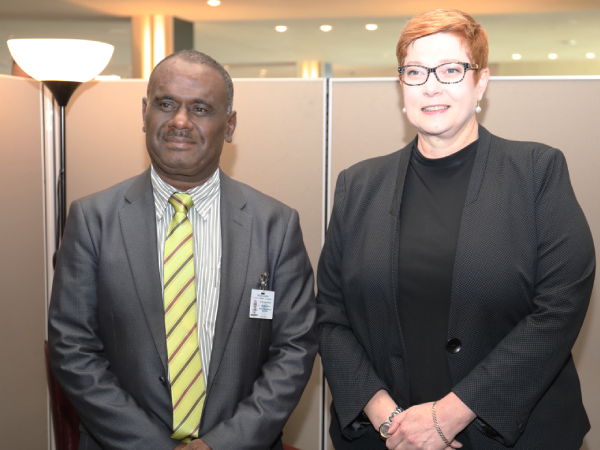 A meeting between Australian Foreign Minister Marise Payne and her Solomons Islands counterpart is a positive step forward, according to the prime minister.

Scott Morrison said the meeting between Senator Payne and Jeremiah Manele in Brisbane reinforced Australia’s role in the region.

The meeting came following heightened tensions between the two countries in the wake of the Solomons signing a security pact with China.

“It also reassured, once again, that the Solomon Islands are not considering or would not support the establishment of a naval presence,” he told reporters in Perth on Saturday.

“There was the opportunity for a meeting to take place here, and that was a sensible opportunity to take up.”

However, the prime minister did not comment on why it took so long for the meeting to take place following news of the security pact.

Senator Payne confirmed the meeting occurred as Manele travelled through Brisbane on Friday, where she expressed concern about the lack of transparency around the pact.

“Australia has been consistent and clear in stating our respect for Solomon Islands’ sovereign decision-making,” she said.

“We agreed that Australia remains the Solomon Islands’ security partner of choice.”

Senator Payne said she had been reassured the Pacific nation would not house a foreign military base.

The prime minister also declined to say whether New Zealand should have a bigger effort in the Pacific to counter Chinese aggression.

Morrison said he and Prime Minister Jacinda Ardern have worked closely to ensure increased involvement in the Pacific is co-ordinated.

“(She) shares the same passion for the Pacific region,” he said.

Trade Minister Dan Tehan said he was told it had been a “very productive conversation”.

“Talking about how we respect the sovereignty of the Solomon Islands but how we are very concerned about the security agreement with China,” Tehan told the ABC on Saturday.

Senator Payne’s spokesperson said the pair had agreed Australia was Solomon Islands’ security partner of choice and was reassured the Pacific nation would not house a foreign military base.

“Australia will always work constructively and respectfully with our Pacific family,” they said.

Tehan said he thinks it is important to “continue working and building that relationship.”

Prime Minister Scott Morrison has warned any construction of a Chinese military base in the Solomon Islands would be a “red line”.

But he has not detailed what the consequences would be if the line was crossed.

Tehan said the point being made was that no one saw a Chinese base in the Solomons as being in the interests of the region.

“What we want to do is to be making sure that we’re presenting a very strong case as to why it is incredibly important that we don’t see militarisation of the Pacific Islands,” Tehan said.

Labor has criticised the Morrison government’s handling of its ties with Solomon Islands, with deputy leader Richard Marles saying on Friday that repairing the relationship with the nation would be a priority for his party.

“It’s really important, obviously, that Australia presents itself as wanting to help the people of the Pacific in the challenges that they face,” he said.

Prime Minister Manasseh Sogavare told Solomon Islands parliament this week the country was being treated like kindergarten students “walking around with Colt 45s in our hands” who needed to be supervised.