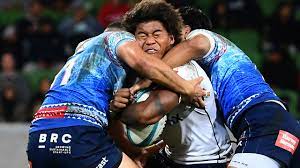 The Melbourne Rebels have made it a Super Saturday for Australian teams, backing up the NSW Waratahs’ shock win with a 26-22 victory over Moana Pasifika.

The Waratahs upset the Crusaders 24-21 in Sydney in the early game before the Rebels held on for their own Super Rugby Pacific win over the competition newcomers at AAMI Park.

A try in the 77th minute by Moana Pasifika winger Timoci Tavatavanawai set up a thrilling finish although the conversion by Christian Lealiifano was off target.

The Rebels then had centre Ray Nu’u sent off in the final minute for a high shot on Lealiifano, but Lincoln McClutchie failed to find touch, robbing his team of a final attempt to score a match-winning try.

With six minutes remaining, Rebels five-eighth Gordon pulled off a crucial try saver, knocking the ball from the hands of McClutchie as he dived over the line.

“It wasn’t pretty at times but we hung in,” said Melbourne coach Kevin Foote.

“Carter Gordon’s tackle in the corner, it was pretty special. It’s good to get the win and I’m really proud.”

Moana Pasifika coach Aaron Mauger felt his team failed to take all of their opportunities.

“Obviously, it could have gone either way. It went right down to the wire there and the lesson for us was probably around patience,” Mauger said.

The lead changed four times through the match with Melbourne managing to stay in front from the 53rd minute, when fullback Reece Hodge glided through a gap in the defence.

Moana Pasifika’s first match on Australian soil was postponed in the last round with Western Force unable to field a side due to COVID-19.

Their first points came through flanker Alamanda Motuga after they used an attacking line-out to drive the ball across the line in the 10th minute.

Rebels hooker James Hanson countered, scoring twice off the same play, with a late penalty strike by Lealiifano reducing the Rebels’ lead to 14-10 at halftime.

Moana Pasifika’s pressure on Melbourne reaped a reward in the 49th minute with prop Abraham Pole’s try regaining the lead for the visitors until Hodge’s five-pointer.

Wallabies winger Andrew Kellaway then broke a seven-game drought with a try against the run of play to give the hosts more breathing room.

Foote said he needed another look at Nu’a’s red card tackle, saying he initially thought it was shoulder to shoulder.

The centre only returned for this match from a two-match ban.