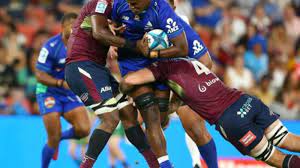 The Highlanders have cruelly denied Fijian Drua a historic win in their first Super Rugby Pacific match played at home, with a full house at Suva’s ANZ Stadium unable to lift their team to victory.

The visitors rebounded from last week’s Super Round loss to the Brumbies to clinch a thrilling 27-24 win on Saturday.

The Highlanders didn’t hit the front until the 63rd minute when they declined a certain three points after receiving penalty and instead backed themselves to deliver a try from the line-out.

They came up trumps through replacement hooker Rhys Marshall after they drove the ball over the line to take a 25-24 lead before that was extended by Mitchell Hunt’s conversion.

In their first season, the Drua played all their home games against Australian teams in Australia due to COVID-19 enforced travel restrictions.

They were given a raucous homecoming with more than 15,000 fans turning out to provide a carnival atmosphere with Mexican waves and horns blowing.

The Fijian faithful didn’t have to wait long to celebrate with halfback Frank Lomani scoring in the third minute.

The Highlanders levelled soon after through Sam Gilbert after they worked the ball wide for the winger to flop across the line.

The Drua’s second try was special, starting inside their 22 with Vinaya Habosi tip-toeing down the sideline before turning on the burners.

They added a third when Kalaveti Ravouvou dived on to a Teti Tela kick into the in-goal and led 24-17 at halftime.

An early Highlanders penalty in the second half proved crucial in preventing a Fijian fairytale. Marshall’s try was the only five-pointer of the second 40, with the Highlanders staying composed in the face of some relentless Drua attack as they hunted a match-winner.

It was the men from Dunedin’s second win of the season, previously beating the other new competition entry in Moana Pasifika.

“That was a full 80 minute effort – a hell of a game and I’m so proud of our boys for sticking in there,” Highlanders skipper and halfback Aaron Smith told Stan Sport.

“We knew the Fijians were going to be very dangerous as they’re a team who can score out of nothing and they got a couple of early ones but we stuck to our plan.”

“We knew the Highlanders were going to come at us and I’m proud of the effort of the boys, trying to stay competitive and playing 80 minute rugby,” he said.

Meanwhile, Otago Highlanders coach and former All Blacks Tony Brown has sent a warning to Super Rugby Pacific teams that the Swire Shipping Fijian Drua will be hard to beat in the near future.

He made the comment when his side edged the Drua 27-24 at the ANZ Stadium in Suva Saturday.

The Fijian Drua scored three tries against the visitors’ four in a top-notch match filled with intensity and pace.

The Highlanders remained composed for 80 minutes against the hard hits and busting runs from the Fijian Drua to record the three-point victory after trailing 17-21 at halftime.

Frank Lomani, Drua halfback, got the fans into a frenzy and formation of Mexican waves as he finished off an Apisalome Vota and Kalaveti Ravouvou break two minutes from start for the Drua to lead 7-0.

The Highlanders’ victory, their second for the season, stopped the Meli Derenalagi-captained side from a historic feat at home.

The Drua players threw everything at the Higlanders who had been playing Super Rugby for years.

The Highlanders remained composed and played a chasing game until the 60th minute.

They opted for kick and line-out instead of three points when they were awarded two penalties in front of the post.

They won through replacement hooker Rhys Marshall after they drove the ball over the line to take a 25-24 lead before that was extended by Mitchell Hunt’s conversion.

Drua’s tries came from Frank Lomani, Vinaya Habosi, who had a grand day at wing, and centre Kalaveti Ravouvou. Teti Tela was on spot with his conversions.

After locking the Highlanders in seven scrums throughout the match, Brown said the Drua would be among the teams to watch in the competition.

“When we come and play in Fiji, we are not playing against a team, we are meeting the whole country,” Brown said.

“Rugby is huge in Fiji and we are proud of the Fijian Drua and how they played. The match was full of electricity, ferocious and pure Fijian rugby.

“The Drua has been playing well and they will be a team to beat in the next 18 months.”

Highlanders captain Aaron Smith said: “We knew the Fijians were going to be very dangerous as they’re a team who can score out of nothing and they got a couple of early ones but we stuck to our plan”.

Fijian Drua coach Mick Byrne commended his side for the grand game.

“We wanted to win at home, but I am happy that we have made our mark in the competition,” he said.

The Drua meets the Hurricanes this weekend before returning home to face the Chiefs at Churchill Park in Lautoka on the following weekend.