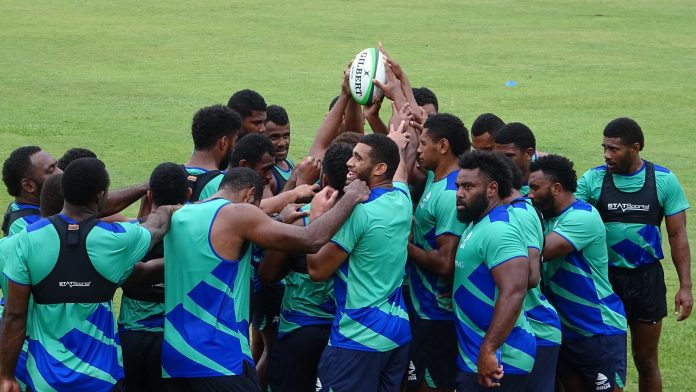 Fijian Drua Head Coach Mick Byrne has announced his line-up for the historic first homecoming match at ANZ Stadium Suva, as the men from Fiji take on the Highlanders from New Zealand.

It’s the first time in six months for majority of the players to return home for a chance to play in front of family and fans in the Fijian capital.

The halves pairing sees Frank Lomani (9) at halfback and Teti Tela (10) at flyhalf. The powerful centre combination of Kalaveti Ravouvou (12) and Apisalome Vota (13) reunite for this match. Vinaya Habosi (11) and Selestino Ravutaumada (14) are on the wings, while Kitione Taliga (15) is at fullback.

Providing impact off the bench this week are Tevita Ikanivere (16), Meli Tuni (17) and Samuela Tawake (18). Isoa Nasilasila (19) and Joseva Tamani (20) round out the substitute forward pack. The backline impact players off the bench are Simione Kuruvoli (21), Onisi Ratave (22) and Kitione Ratu (23).

Coach Byrne said: “It’s so exciting for us to be playing our first ever match on home soil. We’re looking forward to playing in front of our fans. The boys understand the importance of a good performance in front of their home crowd. It’s also our second hit-out against a New Zealand team so we expect it to be a fast and physical clash. We’ve geared up for that and we’re really looking forward to putting a performance out on the park that our fans will be proud of.”

Meanwhile, the Fijian Government has committed $3 million (US$1.5 million) to Counter Ruck Pte Limited (CRL) which was established by the Fiji Rugby Union to own and operate the Swire Shipping Fijian Drua.

This follows the signing of the Deed of Understanding between the Attorney-General and Minister for Economy, Aiyaz Sayed-Khaiyum, the Chairman of Fiji Rugby Union, Commodore Humphrey Tawake, and CRL Board Director John O’Connor with the Chief Executive Officer of the Fijian Drua Brian Thorburn also in attendance.

Additionally, CRL has been granted a 13-year income tax holiday and will be provided a waiver for customs duty on goods imported specifically for Fijian Drua-related venues and High Performance Base from 1 July 2022 to 30 June 2023.