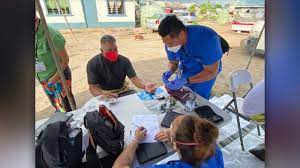 -A New Zealand medical team in Tonga is overwhelmed by the level of mental health support needed by those affected from the volcanic eruption and tsunami three months ago.

The group of eight from the Pasifika Medical Association (PACMAT) has been helping hundreds of people and says there has been deep trauma amid resilience.

“The noise every time there is some thunder here, the kids would cover their ears, and run and hide, they are so traumatised,” he said.

“The adults have to be strong for their family but we can tell they are anxious.”

In the past week, the PACMAT team has provided mental health support for more than 500 people. It has also trained organisations to help others who need support.

Misa said there was a “stigma” around mental health in some of the people they had worked with.

Many of the team’s patients are from families that are now living in church halls after being evacuated from their home islands to Tongatapu.

But despite the tsunami’s trauma, there is resilience among Tonga’s people.

They’re collectively raising income for food by working as a group – weaving, mowing lawns, and cleaning.

“I think the faith and the culture of support that the Tongan people have has gone a long way to provide that kind of support.”

Making a difference to those who need it most, the PACMAT team is heading out this week to damaged coastal areas.