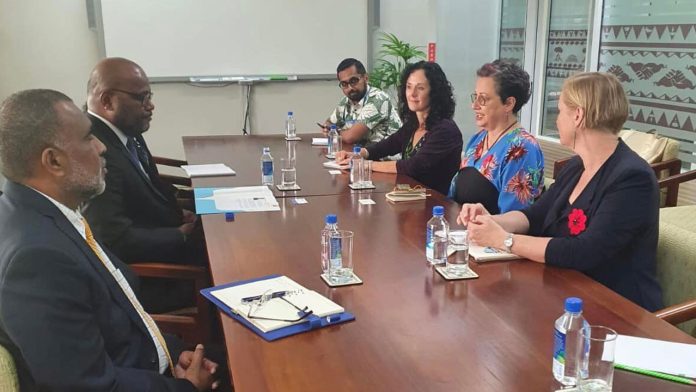 The New Zealand government has increased its climate finance to a billion dollars over the next four years, with the Pacific, including Fiji, receiving half of the funds.

In an interview with FBC News, New Zealand Climate Change Ambassador, Kay Harrison said these funds will be used to assist Fiji and other Pacific countries mitigate the impacts of climate change, and the remaining 50 percent is for adaptation.

Harrison said they will work closely with Fiji on the execution of its climate ambitions.

She said this because Fiji has been at the forefront, demanding global action to mitigate the impacts of climate change in the Pacific.

“Fundamentally, the best support we can provide is the support that you want. If we look at Fiji, it has a national adaptation plan, a climate strategy, all of those things are fundable things, and I think we are in a good place to move forward. “

Harrison said the proper utilisation of climate funds is critical, hence, an initial robust dialogue is needed to ensure the strategies being adopted are relevant and effective.

“We have been telling the world what they’ve needed to respond to, and that’s critical. And I think we are getting there. We have the Paris Agreement, we have its rules, and it’s now time to take action. Working with each other is the only way we are going to succeed. ”

The New Zealand Climate Change Ambassador stresses that it is now time to take action, and collecting concrete climate change stories from vulnerable Pacific countries is the only way we can succeed.

“We are not just looking after ourselves and our own transition, but we want to see what it is you’re doing that could help you do twice as much or twice as fast, and so we are looking for that kind of working together opportunity now. “The time for talking is over; now is the time for action and implementation.”

New Zealand will continue to stand closely with Fiji, demanding climate justice and calling for action from first world countries.