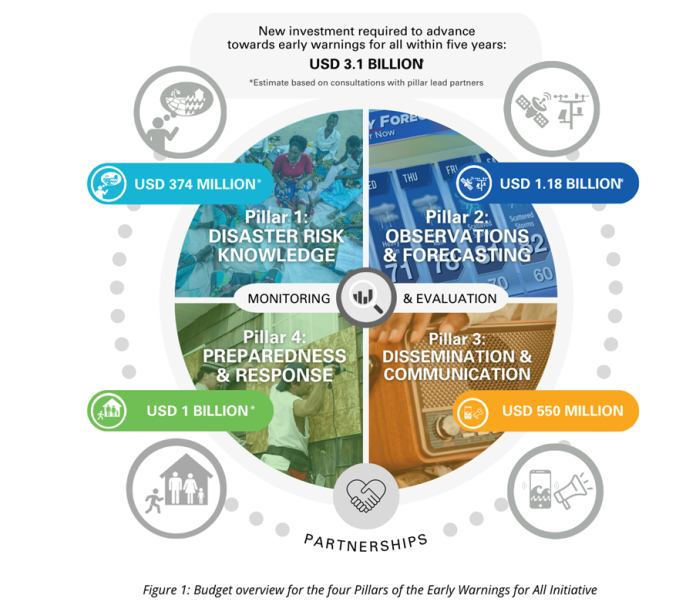 With climate-related disasters displacing more people than conflict, UN Secretary-General António Guterres on Monday unveiled the details of his plan to ensure everyone on the planet is protected by early warning systems within the next five years.

The Executive Action Plan for the Early Warnings for All initiative, calls for initial new targeted investments of US$3.1 billion between 2023 and 2027, equivalent to a cost of just 50 cents per person per year.

Guterres announced the plan at the COP27 climate change conference, underway in Sharm el-Sheikh, Egypt, during a meeting of government and UN leaders, financing agencies, ‘Big Tech’ companies and the private sector.

He told them that people who have barely even contributed to the climate crisis are the most at risk and the least protected.

“Vulnerable communities in climate hotspots are being blindsided by cascading climate disasters without any means of prior alert,” he said.

“People in Africa, South Asia, South and Central America, and the inhabitants of small island states are 15 times more likely to die from climate disasters. These disasters displace three times more people than war. And the situation is getting worse.”

Even though early warning systems save lives, vulnerable communities “have no way of knowing that hazardous weather is on its way”, Guterres continued.

“Countries with limited early warning coverage have disaster mortality eight times higher than countries with high coverage.  The Action Plan launched today sets out the way forward to right this wrong, and protect lives and livelihoods.”

The UN chief had first announced the early warnings target back in March.

The plan will address key gaps in understanding disaster risk, monitoring and forecasting, rapid communication, and preparedness and response.

The US$3.1 billion figure represents a small fraction – roughly six percent – of the requested US$50 billion in adaptation financing, according to the World Meteorological Organisation (WMO).

The UN agency and partners drew up the plan, which was supported by a joint statement signed by 50 countries.

WMO said the need for early warning systems is urgent as the number of recorded disasters has increased five-fold, driven in part by human-induced climate change and more extreme weather.

Even though this trend is expected to continue, half of all countries do not have early warning systems in place, and even fewer have regulatory frameworks to link early warnings to emergency plans.

When it comes to climate change adaptation, early warning systems are widely regarded as the “low-hanging fruit”, said WMO, because they are a relatively cheap and effective way of protecting people and assets.

Furthermore, the Global Commission on Adaptation found that spending just $800 million on these systems in developing countries would avoid losses of US$3 billion to US$16 billion per year.

“Such progress is only possible with modern science, sustained systematic observing networks, daily international exchange of quality data, access to high-quality early warning products, the translation of forecasts into impacts, plus advances in telecommunications,” said Petteri Taalas, the WMO Secretary-General.

The UN, governments and partners will work together to achieve the early warning goal within the next five years.

The plan summarises the necessary initial actions and sets out the pathway to implementation.

To ensure effective implementation, the UN Secretary-General is establishing an Advisory Board which will be co-chaired by the heads of WMO and the UN Office for Disaster Risk Reduction (UNDRR).

Members will include many of the key partners who helped shape the plan to date, and the Secretary-General will receive progress reports in advance of future annual COP meetings.

Oceans under threat like never before, warns World Meteorological Organisation

Time running out as negotiators scramble to finalise the UK COP26...