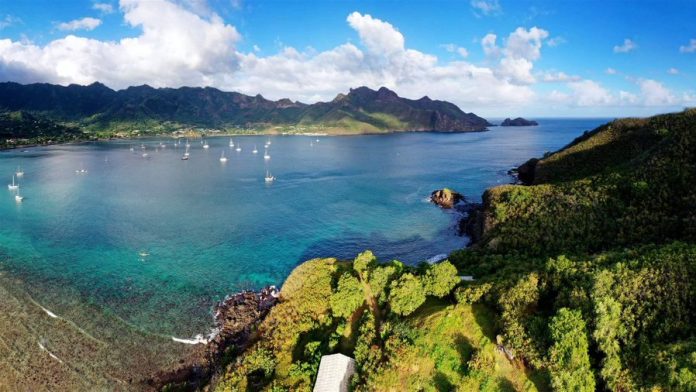 French Polynesian President Édouard Fritch recently committed to conserving 1 million square kilometers (386,000 square miles) of the ocean by creating a new large-scale marine protected area and establishing artisanal fishing zones around each of its 118 islands in the South Pacific Ocean.

The waters surrounding the remote islands offer habitats to an abundance of marine life, including 21 species of shark and a reef system that supports 176 coral and 1,024 known fish species. President Fritch’s commitment could benefit offshore fish living within these rich waters as well as the local artisanal fishers.

A French overseas territory in the South Pacific, French Polynesia holds the largest contiguous exclusive economic zone (EEZ) in the world. The EEZ was designated as a marine area managed by the local government in 2018, to combine the preservation of the marine environment and the sustainable development of the fishing ground.

Although the new measure was welcomed in French Polynesia as a step in the right direction toward effective marine protections, mayors from the Austral and Marquesas islands continue to advocate for creating two large-scale, highly protected marine protected areas (MPAs) around their archipelago—a goal supported by the Pew Bertarelli Ocean Legacy Project.

This interview with Rapa Island Mayor Tuanainai Narii and Nuku Hiva Mayor Benoît Kautai, who is also the president of the council of Marquesas mayors (CODIM).

Why is it so important to protect the waters of French Polynesia?

Benoît Kautai: It’s really a question of heritage and food security. Today, fishermen are seeing a decrease in resources that forces them to go fishing much further from the coast. I think our children and grandchildren will look at us and wonder what we did.

Tuanainai Narii: Polynesians are a people of the sea. The ocean connects our islands and our people. In the Austral Islands, everyone fishes to feed themselves and their families. As mayor, I have the responsibility to represent my people, which has been investing for decades to preserve our way of life and protect the food pantry that nature and the ocean offer us. It should be up to us to choose the destiny of our waters; it’s not up to others to choose for us. A government must work hand-in-hand with its people, and we continue to make progress.

Without effective marine protections, how do you see the future—for people and nature?

Tuanainai Narii: Rapa is the most isolated and remote island in French Polynesia. Under these conditions, we are highly dependent on natural resources. Without effective protection measures, our future and our way of life could be jeopardised. This is what we see in other islands that do not have the necessary protection measures.

What about local or traditional efforts?

Tuanainai Narii: Rapa was the first island in French Polynesia to have re-established a rahui. Remind us what that is?

Tuanainai Narii: It’s a traditional practice of limiting access to an area or resource as a means of conservation. We established one in the waters right around the island, in the 1980s. But now we’re seeing a decrease in resources further from shore, such as tuna, so we need to extend the rahui to our offshore waters.

Benoît Kautai: Our ancestors already set up measures to control the use of certain areas or species to preserve resources, called ahui in the north of Marquesas or kahui in the south of Marquesas. These measures were tapu, or sacred.

Ua Huka is the first island of the archipelago to have set up an Ahui in the form of a regulated fishing zone, and our wish is to see this system extended to all the islands of the archipelago. The CODIM (the council of Marquesas mayors), the six municipalities of the inhabited Marquesas islands, the Department of Marine Resources, the Pew Bertarelli Ocean Legacy project, and the local Federation of the Environmental Association are currently working on this project of marine preservation.

What are you proposing now?

Tuanainai Narii: In the Austral, we introduced our proposal—named Rāhui Nui nō Tuha’a Pae, or “the big rāhui of the Austral Islands”—in 2016. In December of 2021, the mayors of the Austral submitted a new consensus MPA proposal to the government that would create a contiguous area extending 50 nautical miles around the two groups of islands—one around Maria, Rimatara, Rurutu, Tubuai, and Raivavae in one area, and the other surrounding Rapa and Marotiri—where only artisanal fishing would be allowed. Additionally, we propose a strong protection zone starting at 50 nautical miles and extending to 200 nautical miles around Rapa and Marotiri. So the total surface of this MPA proposal, including the strong protection and artisanal fishing zones, would cover a total of about 680,000 square kilometers (263,000 square miles).

Benoît Kautai: The council of Marquesas mayors and the Marquesan population have been working for nearly a decade to create a large marine protected area, called Te Tai Nui A Hau, or “The Ocean of Peace,” which could very well be integrated into the existing managed marine area of French Polynesia. These are projects that take a long time to be realized because they have to go through stages of public consultation with the local population, scientists, and the relevant authorities at the country and French state level. The Te Tai Nui A Hau project foresees three zones: a zone reserved for artisanal fishing, a zone open to industrial fishing, and a strong protection zone that would forbid fishing in order to preserve the reproduction of bigeye tuna.

President Fritch made announcements at the One Ocean Summit about the areas that will be dedicated to artisanal fishing in all the archipelagos. We’re waiting to learn the specific measures for the Marquesas Islands.

For now, only the southeast of Polynesia will be included in the strong marine protection zone. We could therefore continue our collaboration with the French Polynesian government in order to study the possibility of dedicating an area to the protection of bigeye tuna, which would be the same area as a strong protection area of the Marquesas.

Tuanainai Narii: Yes. Édouard Fritch’s proposal is a good step forward. The mayors of the Austral are still committed to participate in the implementation of this marine protected area and are looking forward to its official designation.

Benoît Kautai: I would like to believe that our initiative has contributed to this (the protections announced by Fritch). In any case, the important thing is to salute the commitments of the president, which respond, in part, to the objectives we had set with the Te Tai Nui A Hau project.

Seas are coming for us in Kiribati