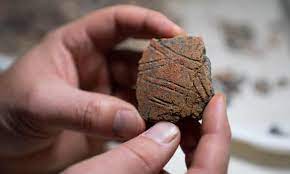 The peopling of the Pacific is one of the most significant migrations in human history. And now an archaeological discovery on a small island in Papua New Guinea has recast the early scope of this settlement, in a finding archaeologists say could explain the migration east three millennia ago.

The unearthing of animal bones and tools on Brooker Island, 200km east of mainland Papua New Guinea, suggests that the migration of Lapita people throughout Papua New Guinea was far more extensive than previously thought.

The Lapita – a group with east Asian ancestry – are archaeologically recognised as the first people to make landfall on the islands of Remote Oceania, which include Tonga, Samoa and Vanuatu.

They are believed to have migrated there from south-east Asia, via the Bismarck archipelago off the north-eastern coast of New Guinea between 3,100 and 3,350 years ago.

Lapita-linked groups are known to have introduced pottery, animals such as pigs and chickens, and Austronesian languages to New Guinea, which has been inhabited by Indigenous people for at least 50,000 years.

In new research published in the journal Nature Ecology & Evolution, archaeologists believe they have unearthed the earliest evidence for Lapita-introduced animals and imported obsidian – volcanic glass – in southern New Guinea. The findings are between 3,060 and 3,480 years old, they estimate.

Dr Ben Shaw of the Australian National University, the study’s first author, said the discovery was evidence of the “initial interaction between Indigenous populations, who were already in the area, and Lapita migrants”.

“There were other changes to social systems on the island at that time which indicate there were changes to way people were living there,” Shaw said.

“This is a signature that’s new in archaeology, particularly in this part of New Guinea,” Shaw said. “[Lapita] didn’t stay in this area and efforts were therefore put towards going further eastward, which resulted in the colonisation of uninhabited Pacific islands like Vanuatu and all the way out to Tonga and Samoa.”

The researchers argue that the “interaction with Indigenous populations during this time was pivotal in influencing island-hopping strategies that culminated in the initial peopling of Remote Oceania”.

“Similarly rapid but later Lapita dispersals through southern New Guinea and perhaps across the Torres Strait Islands and along the east coast of Australia, did not, therefore, occur through a terra incognita but were probably facilitated by earlier frontier interactions with Indigenous populations,” they wrote.

The team found evidence on Brooker Island for the introduction of pigs and dogs by Lapita, which was accompanied by concurrent changes in behaviour such as the use of turtle shells to make tools, and the targeted harvesting of marine animals.

“The contemporary presence of lithic axe-adze technologies unrelated to those associated with Lapita suggests that Indigenous cultural influences contributed to cultural diversity in the region despite language replacement,” the researchers wrote.

Shaw said Austronesian languages, which were introduced by Lapita groups, are spoken on most of the islands of Papua New Guinea.

“Although these islands have got a very long history of Indigenous occupation, and what the archaeology tells us is that there’s continued input of cultural influence from those Indigenous populations … there was a complete changeover from the Indigenous languages that would have been spoken there to the ones that are now spoken,” he said.