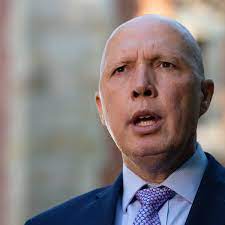 Last week a controversial security pact was signed by the Solomon Islands and China despite major efforts to stop the deal.

There are fears the agreement could see China establish a military presence in the South Pacific island nation.

“The only way that you can preserve peace is to prepare for war and to be strong as a country,” Dutton said.

“That’s the reality. Not to cower and be on a bended knee and be weak”

The Solomons has sought to downplay the significance of the agreement and says it won’t lead to China establishing a military base there, but many neighbouring countries and Western nations remain worried.

The White House says it would have significant concerns if China established a military base in the Pacific after signing a security deal with the Solomon Islands.

“We are a country with a proud heritage that we commemorate today, the most important day on our calendar,” he said.

“We’re determined to make sure we can have peace in our country.”

Dutton said it is important to “invest into the men and women of the Australian Defence Force”.

“You give them the capabilities,” he said.

“The arrangement we’ve entered into with AUKUS and particularly with the United States and the United Kingdom and now with Japan and India, these are all countries that want peace and the preservation of that peace in our region.

“We will work shoulder-to-shoulder with them to make sure that’s achieved.

“Curling up in a ball, pretending that nothing is happening, saying nothing, that is not going to be in our long-term interests and we should be very honest about that,” he said.