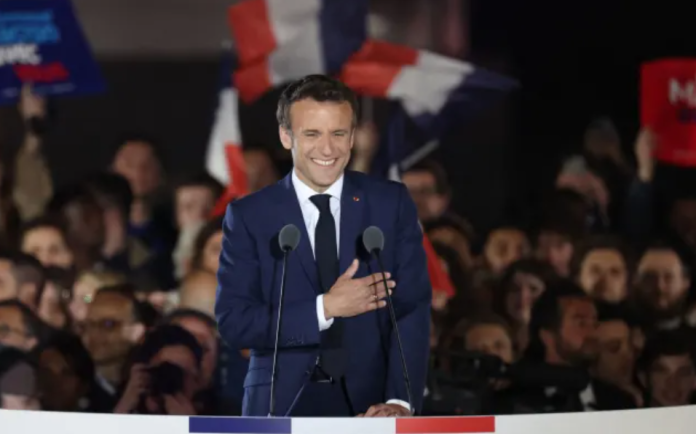 President Emmanuel Macron has won re-election in the second round of the French Presidential poll, held on Sunday. Macron is the youngest President in French history and the first to win a second term of office in 20 years, beating opponent Marine Le Pen by 58.8 percent to 41.2 percent.

This year, in the French Pacific dependency of New Caledonia, Macron boosted his score significantly, winning 61.04 percent of support against 38.96 percent for Le Pen and her Rassemblement national party. The returning French President topped the poll in every municipality in New Caledonia. In contrast, for his first victory in 2017, Macron barely beat his extreme-Right contender amongst New Caledonian voters, winning just 53 percent to Le Pen’s 47 percent.

Over the last five years, the French President has won the backing of many conservative voters and politicians in New Caledonia, who welcome his government’s opposition to political independence, his neoliberal business-oriented austerity policies and his strategic commitment to the Indo-Pacific region.

Anti-independence leaders were also delighted with the French government’s decision to proceed with New Caledonia’s third referendum under the Noumea Accord in December 2021, against the call for delay from indigenous Kanak customary leaders and the Front de Libération Nationale Kanak et Socialiste (FLNKS) independence movement.

Despite this shift in support, however, nearly two thirds of New Caledonians did not bother to vote Sunday. This record low turnout, at just 34.79% of registered voters, was based on a mix of factors.

With non-compulsory voting, many people are disinterested in politics and there’s a level of fatigue after a series of local elections and referendums over the last five years, overlaid by the trials of the COVID pandemic. The lack of a Left-wing candidate in the second round turned off many progressive voters (across France, the choice between Macron and Le Pen is often described as choosing between “the plague or cholera”).

Beyond all this, however, was an organised call for people to abstain, issued by all major independence parties and trade unions. While 47.1 percent of registered electors voted in the capital Noumea, voters in pro-independence municipalities stayed away in droves. In the Kanak-majority North and Loyalty Islands provinces, just 2.9 percent of voters turned out in Ouvea, 5.64 percent in Ponerihouen, 4.57 percent in Canala, 7.7 percent in Hienghène, with similar tallies across many rural areas. For the indigenous Kanak people, the future is in the Pacific, not in Europe.

Before the vote, a broad front of independence groups – the Comité stratégique des indépendantistes (CSI) – had called on New Caledonians to abstain from the second round run-off between Macron and Le Pen. This coalition includes the FLNKS independence movement, the Parti travailliste (Labour Party), Dynamique unitaire Sud and the USTKE trade union confederation.

FLNKS spokesperson and Union Calédonienne President Daniel Goa said: “It is an internal election in France, and this choice is for the French people alone. We tell our activists not to vote.”

The Parti de Libération Kanak (Palika) had called for a vote for Left-wing candidate Jean-Luc Mélenchon in the first round on 10 April. The pro-independence party, led by Paul Neayoutine, then stated that “as there is no longer a qualified left-wing candidate in the second round, Palika calls on New Caledonian voters to abstain from voting on 24 April.”

Dynamique unitaire Sud (DUS), which unites progressive activists in New Caledonia’s Southern Province, joined widespread sentiment on the Left that neither Macron or Le Pen reflected much of a choice. In a statement, DUS stated: “We accept without hesitation the call to hold the line against the extreme Right. Despite this, voting for Emmanuel Macron means approving the phony referendum of 12 December that the outgoing president stubbornly organised, in defiance of the Kanak people.”

This election campaign has caused serious disruption on the Right amongst anti-independence parties in New Caledonia. It has exacerbated debates about the best way forward in the aftermath of the three referendums under the Noumea Accord – the last boycotted by independence supporters in December 2021.

For the first round of this month’s French Presidential elections, the Rassemblement party backed the national LR candidate Valerie Pécresse, who polled poorly and was eliminated from the race. To the shock of other conservative parties, Rassemblement then announced it wouldn’t endorse a choice between Macron and Le Pen in the second round. The LRC under Sonia Backès, Calédonie ensemble under Phillipe Gomès and many other anti-independence leaders had endorsed Macron for both rounds of the election (though were shocked when MPC’s Gil Brial endorsed Marine Le Pen for the second round).

Overall, this turmoil has contributed to a major reshuffle in the parliamentary groups in New Caledonia’s 54-member Congress. With the breakup between Rassemblement and other members of the Avenir en Confiance, there are now three competing anti-independence forces in the local legislature: The Loyalists (with 12 seats); Avenir en Confiance (7); and Calédonie ensemble (6); They face two main independence groups UC-FLNKS (13 seats) and UNI (11), as well as five non-aligned members from smaller parties.

This division will continue as parties contend for the looming French legislative elections in June, where New Caledonia has two seats in the French National Assembly in Paris.

One of New Caledonia’s long-serving deputies in Paris – Calédonie ensemble’s Philippe Gomès – has already announced he will not re-contest his seat. In contrast, Rassemblement’s Thierry Santa and Virginie Ruffenach have announced they will run for the two seats in the French lower house, contributing to ongoing divisions on the Right. Independence parties that make up the FLNKS will soon hold a Congress to decide whether they can choose a united candidate for each constituency, hoping to win a seat in the French legislature for the first time in decades.

These representatives in Paris will be crucial interlocuters with President Macron and French politicians in the months ahead. New Caledonian leaders are preparing to meet the incoming French government after the June National Assembly elections, for crucial negotiations on the future political status of the Pacific dependency. Maintaining its quest for a sovereign Kanaky-New Caledonia, the FLNKS wants a referendum on independence under the auspices of the United Nations. The Right cannot agree on what status New Caledonia should maintain within the French Republic. Storms ahead.