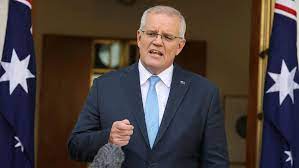 Australia knew about a secret draft security pact between China and Solomon Islands weeks before it mysteriously surfaced on the internet, with several government sources claiming the nation’s intelligence agencies played a role in orchestrating the leak.

Prime Minister Scott Morrison and Foreign Minister Marise Payne are under increasing pressure to reveal what they knew about the proposed agreement before the draft was leaked on 24 March and their actions since after the Australian government this week failed to convince Honiara to abandon the deal with Beijing.

The deal could base Chinese naval vessels and troops less than 2000 kilometres off the Australian east coast and cut off vital supply lines to the US and Asia in the event of a conflict.

“I can’t go into all the details as to how Australia is able to know the specific information, as they are security matters,” Morrison said. “But what I do know is we have always been very conscious of that threat of China being able to influence a nation in our region.”

Multiple government and security sources, who are not authorised to speak publicly but have direct knowledge of the events, confirmed that the Australian government was aware of the proposed agreement weeks before it was mysteriously posted online.

Two of those sources said Australian intelligence agencies played a role in leaking the document in an effort to put public pressure on China and Solomons Prime Minister Manasseh Sogavare’s government, but declined to outline what role that was.

It is unclear whether the Australian government was actually in possession of the text of the agreement, or was aware of or behind efforts to leak the document from within the Solomons government.

The leak occurred two weeks before two of Australia’s top spies – Paul Symon, the head of the overseas spy agency the Australian Secret Intelligence Service (ASIS) and Andrew Shearer, the director-general of the Office of National Intelligence – travelled to the Solomons to meet with Sogavare.

The claims appear to contradict statements made by both Payne and Pacific Minister Zed Seselja.

Payne told Sky News on Thursday the “bilateral security agreement only became known to us when it was published on social media at the end of March”.

Seselja said: “We found out about it when we saw that leaked draft”.

The claims also raise questions about who had access to the document and whether Australia’s most senior ministers were briefed on a plan to leak against one of its most important partners in the Pacific.

One person not related to the Australian or Solomons government had access to the document as early as 18 March, six days before it was posted online by Celsus Irokwato Talifilu. The person, who didn’t wish to be identified, said the document was circulating among Pacific government and security communities in the week leading up to its publication on social media but had yet to be verified by official sources.

Talifilu, a political advisor to Sogavare’s rival Daniel Suidani, the premier of Malaita Province, posted the document on a Malaitan social media page on 24 March.

The document was then posted by New Zealand-based Solomons expert Anna Powles on Twitter, setting off a scramble across the Pacific to verify its authenticity.

The Australian government took more than six hours to officially respond to the document on 24 March but had verified its authenticity within three hours.

Government sources at the time said while Australia had known of China’s broad intentions in the region and was aware of the threat of a security agreement, they had no knowledge of the specifics of the deal until it was posted on social media.

Morrison on Thursday criticised the “secret deal” for having arrangements that “are not public”.

The speed and scale of the agreement has left Canberra, Washington and Wellington racing to contain the fallout after failing to convince Honiara to ditch the deal.

Danny Philip, a former Solomon Islands prime minister and confidante of current leader Manasseh Sogavare, confirmed the final text of the deal signed with China was “very close” to the leaked draft.

Philip compared the arrangement to the Pine Gap satellite spy base jointly operated with the U.S just outside Alice Springs in the Northern Territory.

“People in Australia know very little about Pine Gap in the middle of the desert, the military base of the U.S,” he said on Thursday.

Labor has put the mishandling of the deal at the centre of the federal election campaign, abandoning its relative bipartisanship on foreign affairs in a bid to neutralise the Coalition’s perceived strength on national security and Chinese Communist Party influence.

Labor leader Anthony Albanese said “it was beyond comprehension” that Payne had not been sent to Honiara after a draft was leaked of the agreement on 24 March.

“The U.S very much relies upon Australia and sees Australia as playing that key role of partners in the Indo-Pacific,” he said. “Australia and Scott Morrison have just gone missing.”

Payne has campaigned in must-win seats including Parramatta, Boothby, Hughes and Banks since the federal election was called, rather than travelling to Honiara to personally address China’s security deal.

Payne did make a number of media appearances on Wednesday and Thursday where she was questioned on the security pact. On Wednesday, the day signing of the Chinese deal was made public, she was campaigning in Corangamite, an ultra-marginal seat in Victoria the Coalition is desperate to win.

A spokesperson for Payne confirmed she had been campaigning in various seats over the past week.

“As we have made clear, our engagement with Solomon Islands on its security agreement with China has been carefully considered and calibrated, based on a respect for the sovereignty of Solomon Islands,” the spokesperson said….