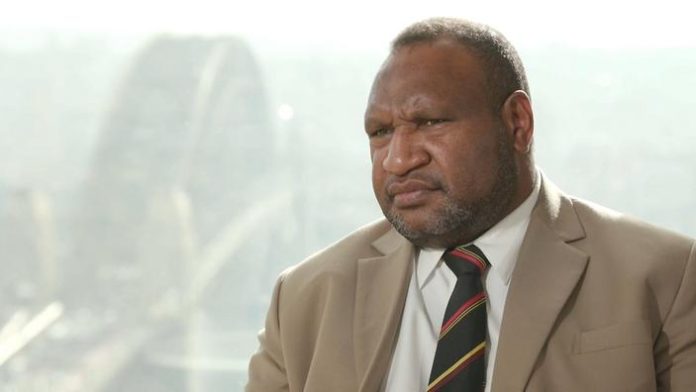 The Union Bank of Switzerland (UBS) Australia overcharged the PNG Government by AUD$175 million (about K464 million) which must be reimbursed to the State, it has been revealed.

Prime Minister James Marape revealed this in Parliament Wednesday when tabling the Commission of Inquiry report on the UBS K3 billion (US$1.3 billion) loan in 2014.

Marape said the inquiry found that the then government led by his predecessor Peter O’Neill had failed to follow proper processes, “coupled with the speed with which complex documentation was produced meant no one within the public service understood the overcharging of the State by UBS”.

“The UBS loan had no satisfactory justification or rationale,” he said.

“It declared that there was no strategic interest in obtaining new Oil Search shares in 2014.

“In addition to its sizable fee of AUD$28.4 million (about K73 million), UBS also benefitted from the refinancing of the collar loan in December 2014 and February 2016, and from the ultimate sale of the shares in September 2017.

“Its total overcharging amounts to AUD$175 million, and should be made to repay the amount.”

Marape said the lawyers retained by the State did not advise it properly of the potential conflict of interests and how to manage them.

He said the officer responsible for the NEC policy submission “failed to set out the downside to the proposal and the false statement that the then treasurer agreed to the submission contents”.

“The then prime minister knew the submission was complex and lengthy but did not provide the NEC advance notice or the real opportunity to debate the submission during the meeting,” he added.

“The meeting lasted less than an hour.

Former prime minister Peter O’Neill has questioned the credibility of the commission of inquiry into the UBS loan, saying it was also the most expensive ever in the country.

He called the three-year inquiry, costing K30 million(US$8.5 million), a political witch-hunt, with a lack of independence in appointing the commissioners from day one.

He also questioned the timing of the tabling in Parliament of the commission’s report “just 10 days from the writs being issued”.

He said: “The report says that I am responsible for the UBS loan.

“I am responsible and have never shied away from my responsibility in this regard.

“I fulfilled my role as prime minister and head of Cabinet.

“But I am disappointed that the (commission of inquiry) has been highly politicised with regular public commentary made by Prime Minister James Marape encouraging some negative findings against me.”

O’Neill said the commission had been “influenced by gossip, and the investigations done were personalised with an unwarranted level of scrutiny of private individuals and private companies”.

“Nothing was found despite the intensive investigations.”

According to the report, O’Neill was “centrally responsible for the UBS loan and should be prosecuted for giving false evidence to the commission, and must be referred to the Independent Commission Against Corruption (ICAC)”.

But O’Neill said there could a “serious conflict of interest” as the chief commissioner and (commission) chairman had been replaced as chief justice by his government.

“He has now chosen to believe the word of unreliable witness, infamous Jimmy Maladina, against my testimony and has subsequently recommended that I be referred to ICAC,” O’Neill said.

“I intend to test this in court because there is no collaborating evidence to support the claim by Maladina that he was a witness to an alleged meeting of some sort.”

O’Neill said he hoped that his statements and recommendations to the commission of inquiry be made public so that people could form their own opinions.

“I think our people will judge this Government for its lack of action – burying our country in debt and leading our people into high costs of living,” O’Neill said.

East Sepik Governor Allan Bird has called the UBS loan deal as the most brilliant scam ever concocted in the nation’s history.

Bird said it was the deliberate game plan of former prime minister Peter O’Neill “to scam and defraud the people of PNG”.

“There is more integrity at buai markets than on this floor because we lie all the time,” he said.

“Enough is enough of making stealing look appealing and thinking you can get away with it.

“This behaviour needs to stop and all the recommendations in this report need to be carried by this house.”

Bird said too many lies had been voiced in Parliament since 2014 and in cabinet, so someone must be held accountable.

“He claimed that when Oil Search was in trouble, ‘they somehow knew that somebody was going to bail them out’.

“Six days before the National Executive Council had made their decision, which meant that they had an insider within the government (who) leaked confidential information,” he said.

“We should all be ashamed because we allow similar deals to pass through our government and country.

“Within cabinet in future, the prime minister or his deputy, should not be allowed to sack his treasurer so that he can sign the documents himself. There should be penalties introduced for this.”

Bird also suggested that future speakers of the house must enforce strict rules on those who lied in Parliament.

“Many times we tell lies on the floor but are not penalised for it.

“Some are even rewarded because of it,” he said.

Steven, a former justice minister and attorney-general, said action must be taken to implement the recommendations of the commission of inquiry report.

He said the commission recommended the need to amend the constitution by way of an Organic Law.

“If what I am reading is right, the practice since independence has been to go ahead and get the loan without any prior approval of Parliament, then each former prime minister is guilty,” he said.

“We are pointing fingers but I am worried because the commission has actually found that the State practice favoured the view that prior approval of Parliament is not necessary.”

He said “we can send a very clear picture or signal to our people that we want action by insisting that Section 19 authorities make direct instructions to the solicitor general immediately for this Supreme Court reference to be filed”.

The Section 19 authorities are the speaker, prime minister, attorney general and opposition leader.

“A reference will clearly establish whether the UBS loan was lawful or unlawful,” he said.

He said Prime Minister James Marape and his predecessor Peter O’Neill had assured the people that the next government should be committed “to reform, action, passing laws and prosecuting”.

“But there must be instruction given to the Solicitor-General right now for recovery action – the word is restitution,” Steven said.

Kandep MP Don Polye said too much power is vested in the prime minister which has led to decisions made which hurt the nation.

Contributing to the debate on the Commission of Inquiry into the UBS loan report, he said the power must be shared.

As someone who has been an MP for more than 15 years and served on both sides of the house, Polye said the country’s prime minister had more power that his counterparts in other countries.

“One person is vested with so much power (and) that power must be shared,” he said.

He also said public servants must be the custodians of good governance and stewardship.

Department secretaries, managing directors and chief executive officers of entities must be responsible people who have integrity, and be custodians of the rule of law and good governance.

“There are some systemic and systematic things that we must do to restructure this country, governance and democracy,” he said.

“We are pointing fingers, but I do not want to, because even if you put another person into that position, they will do the same thing because the systemic and systematic structure that we are working with does not serve the country’s interest.”

Polye suggested that there should be a restructure of Parliament to include an upper house which can scrutinise the decisions of the lower house.

He said doing things which were in the best interest of the country was tantamount to corruption.