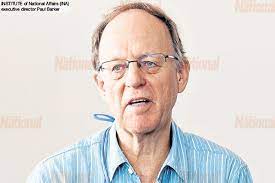 There is no provision in law or in the Constitution for a caretaker government to be formed after Parliament is dissolved for a general election, Institute of National Affairs executive director Paul Barker says.

“The ruling Government can continue to hold Parliament sessions and cabinet meetings until the return of writs (on 29 July for general election),” he said.

Barker was responding to media reports that there would be no arrangements for a caretaker cabinet in the coming general election.

Electoral writs are scheduled to be issued next Thursday and return of writs on 29 July.

Barker told The National that “under the Papua New Guinea Constitution, unlike Australia’s, the sitting members only cease to hold office with the return of the writs”.

“So, in theory, they can hold Parliamentary sessions, as well as hold cabinet meetings,” he said.

“But of course in practice, they do not want to, as they want to be in their electorates campaigning.

“So it is all within the law.”

Meanwhile, Transparency International Papua New Guinea (TIPNG) called on all Members of Parliament (MPs) to ensure that the transition from the 10th Parliament to the 11th Parliament occurred within the rule of law and upholds the Constitution.

TIPNG chairman Peter Aitsi said whilst retaining a full cabinet up to return of writs was lawful and well within the prime minister’s remit, “we caution that any significant decisions that may have a long-term effect and high-cost on PNG, should be carefully considered”.

“In the midst of the election period, it is difficult to ensure that all stakeholders are engaged, and that all systems and processes of Government are adhered to, and not inadvertently breached,” he said.

“It will further jeopardise the integrity of the general election if MPs rush through legislations that are seen to secure funds for the Government to support their re-election.

“Any deliberate abuse of public office by incumbent MPs will not be tolerated by voters.

“Such leaders should be voted out and also prosecuted for corruption.”

Aitsi said Papua New Guineans expected elected legislators to pass laws in the public interest and to demonstrate the highest standards of accountability.

“We should not have political opportunists taking advantage of public trust and abuse it for their own re-election,” he said.

“These types of abuse of power will only compound the administrative challenges faced by the PNG Electoral Commission in delivering a free, fair and safe elections in accordance with the Constitution and electoral laws,” he said.