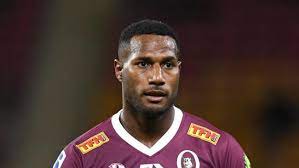 Suliasi Vunivalu is back at last.

The dynamic Fijian finisher now has at least seven games in Super Rugby Pacific to force his way into the Wallabies.

Vunivalu’s selection on the wing for the Queensland Reds is a fresh and exciting dimension to Friday night’s clash against the improving Melbourne Rebels in Melbourne.

If there are early nerves in his first match for 10 months, they’ll be quickly quelled by the familiarity with his surroundings at AAMI Park.

The ground was home base for his heroics as a tryscorer when he played his five seasons for the Melbourne Storm (2016-20) in the NRL.

Vunivalu has been ripping in at full pace and in contact sessions for several weeks since getting the final tick that his troublesome hamstring is strong again after two surgeries.

Wallabies coach Dave Rennie could witness Vunivalu’s fitness for himself because he was a welcome guest at Reds training at Ballymore on Wednesday.

Reds skipper Tate McDermott is in no doubt that Vunivalu, 26, is ready to pick up where he left off with the best moments of his disrupted debut season in 2021.

“Suli…how good and back in Melbourne,” McDermott enthused.

“He started to hit his straps last year and his hamstring went. We were absolutely gutted for him.

“I imagine he’s been incredibly frustrated but he’s the type of guy who doesn’t show it. The boys love having him, a superstar, around.

“He’s awesome for this team and I want to see him getting up in the air for kicks because he’s very Folau-ish with the number of times he gets the ball back for you.”

He’s been away so long you have to remind yourself that Vunivalu is tall at 1.92m and throws 100kg into his running.

McDermott won’t be shy about using him either.

“As a running halfback, there’s nothing better than knowing you have Suli and Filipo (Daugunu) on the wings,” McDermott said.

Through injuries and suspensions, it’s a remodelled Reds outfit.

The return of high-workrate Angus Scott-Young to the bench after beating a knee injury is a major positive because Liam Wright still had his right ankle in a moon boot at training yesterday.

Lock Connor Vest has been reprogrammed as an emergency blindside flanker to start.

His urgent physicality was a big plus off the bench in the recent win over the Brumbies but he hasn’t the swiftness to the ball that Rebels backrowers Brad Wilkin and Richard Hardwick have.

With the injuries to Alex Mafi and Josh Nasser, the Reds are fielding their No.3 hooker in Richie Asiata. Scrum weapon Taniela Tupou will come off the bench at tighthead prop.