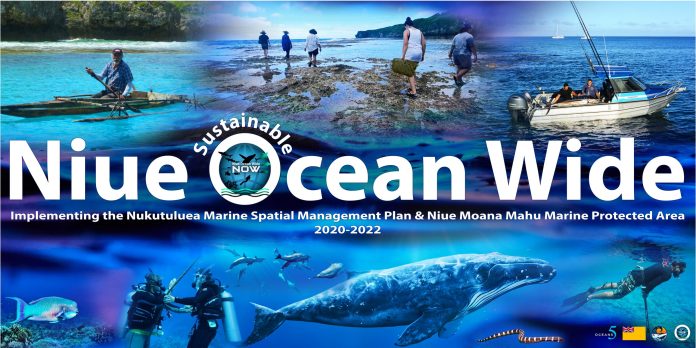 The Government and people of Niue, in collaboration with Tofia Niue through the Niue Ocean Wide (NOW) public private partnership, today announced bold new marine legislation passed in November 2021, that will ensure sustainable use across its entire EEZ and sovereign waters (317,500 square kilometres) while also contributing to the global environment, climate action and key sustainable development goals.

The Niue Nukutuluea Multiple-Use Marine Park safeguards 100 percent of its Exclusive Economic Zone (EEZ and Territorial seas), building on legislation passed in 2020 to fully protect 40 percent as a no-take Large Scale Marine Protected Area (Niue Mona Mahu). These efforts are a culmination of collective efforts over the last 6 years, including scientific assessment, community consultation, and cost benefit analysis, and inspired by a baseline of over 1000 years of traditional knowledge, practice and respect for our ocean.

Niue now exceeds global conservation ambition and responsibilities identified in the relevant UN Sustainable Development Goals (SDGs), Convention on Biodiversity (CBD), Climate Change Convention and Paris Agreement, and supports the realisation of regional sustainable conservation and blue economy aspirations as espoused in the 2050 Strategy for a Blue Pacific Continent and Pacific Oceanscape Framework. Niue continues to call on all stakeholders around the globe to ’walk the talk’ in contributing to real ocean conservation – including individuals, businesses, corporations, philanthropy and Governments.

The decision reflects Niue’s ancestral tradition of taking only what is needed from the ocean to sustain life and ensure continued abundance for future generations. It also underpins the centrality of sustainable and responsible tourism that has been a significant part of Niue’s sustainable development agenda and economy over the last decade. And ultimately, it helps to respond to the reality of unprecedented global pressure on our ocean from climate change, pollution and extractive industry.

Niue’s EEZ-wide action prioritises sustainability and optimising value and benefits to the people of Niue through global best practices in marine spatial planning and five tightly managed marine resource use zones across its oceanscape. The value of Niue’s ocean space under such a management regime is multifaceted. It delivers significant benefits at the global, regional and country-level across a range of dimensions – including ecosystem services, biodiversity protection and uptake, climate change action, socio-economic outcomes and resilient livelihoods. Investing in the longevity of this ‘large blue conservation asset’ stands to benefit everyone, and as such, everyone is invited to help maintain this shared endowment in perpetuity.

With the EEZ-wide management plan in place, the NOW partnership, with support from Oceans 5, National Geographic Pristine Seas, Blue Nature Alliance, and other partners, is focused on building local technical support to implement the marine park and pioneering an innovative country lead sustainable financing mechanism. This includes establishing Niue’s first conservation trust fund and an innovative instrument to capitalise on the fund to allow all stakeholders to contribute and participate in this ocean conservation effort.

Niue intends to launch the Trust and call for capitalisation at the UN Oceans Conference in June 2022…. PACNEWS

PORT MORESBY, 14 APRIL 2022 (POST COURIER) — Outspoken Madang MP Bryan Kramer has been stripped of the Papua New Guinea Justice and Attorney General ministry and given the Immigration and Border Security portfolio in a move seen as a demotion.

Prime Minister James Marape announced the change along with four others in a mini-reshuffle Wednesday, only a fortnight out from the start of the 2022 National General Elections, the writs for which will be issued on 28 April.

Mori resigned from the Cabinet a month ago to lead the Country Party into the elections.

New minister for Provincial and Local-Level Government Affairs Nukundj, last night thanked the Government for having trust in him.

“I thank the prime minister for recognising my potential in elevating me to a senior ministry to be in charge of all the provincial and local level governments,” he said.

“I will discharge my duties to the very best of my knowledge, experiences and ability.”

They are being elevated to Cabinet for the first time.

This is Marape’s fourth reshuffle of his Cabinet since he became prime minister two years ago.

He appeared evasive when asked about the sudden changes with the election just days away.

Marape just said the changes were necessary to maintain Cabinet.

“We had to fill the vacancies left in key portfolios and we had to have ministers who could have oversight on the portfolios so that work continues as we get into the election period,” he said.

He said the experiences of each of the politicians were needed in their new portfolios.

“It is the prerogative of the prime minister, and while I respect the hard work of all three ministers the rotation of the key ministries comes at a time we are heading to the election,” Marape said.

“We want to maintain work at the local level government, stand watch at Immigration and maintain our laws, that is the reason for change.

The changes have nothing to do with performance.

“They have all performed well in their key sectors but I felt these key sectors needed a change.

I know the two new ministers, I know (they) are capable of heading the ministries they are taking care of,” he said.