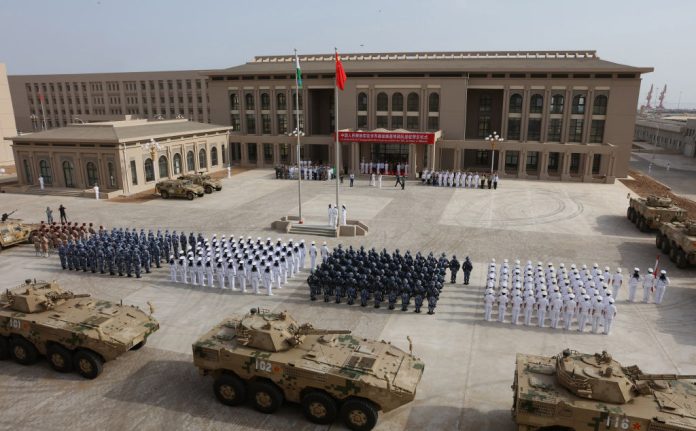 Why shouldn’t we believe Beijing’s claims that its security agreement with Honiara won’t result in a base or place to operate its navy from in Solomon Islands? Because we’ve seen this playbook before: in Djibouti on the Horn of Africa. And because the Chinese government and military routinely lie about their intentions. Xi Jinping telling Barack Obama in 2015 that China would not militarise the South China Sea while he built military bases on reclaimed land there is one iconic example.

Rumours of a Chinese naval base in Djibouti started in 2014. Djibouti’s government even said publicly it was offering ‘Djibouti as home port to the Chinese navy’, and a draft bilateral security agreement was signed that year apparently talking about military port facilities for China.

Chinese officials downplayed ideas of a base for years afterwards. When foreign ministry spokesperson Hua Chunying was asked about the possibility in May 2015, she said:

China and Djibouti enjoy traditional friendship. Friendly cooperation between the two sides has achieved constant growth over recent years, with practical cooperation carried out in various fields. What needs to be pointed out is that regional peace and stability serves the interests of all countries and meets the aspirations shared by China, Djibouti and other countries around the world.

By November 2015, another foreign ministry spokesperson, Hong Lei, responded to claims that China intended to build a naval base, saying: ‘China and Djibouti are discussing about a logistics centre. It is aimed to provide better facilities so that the personnel on Chinese vessels can get better rest and replenishments.’

In January 2016, Hong announced: ‘China and Djibouti consulted with each other and reached consensus on building logistical facilities in Djibouti, which will enable the Chinese troops to better fulfill escort missions and make new contributions to regional peace and stability.’

When the facility opened in 2017, it was reported by international and even some Chinese media as China’s first overseas naval base, although Beijing officially described it as a logistics facility.

As two sovereign and independent countries, China and Solomon Islands are committed to normal law enforcement and security cooperation on the basis of equality, respect and mutual benefit, which conforms to international laws and customary practices. The cooperation is conducive to stability and security of Solomon Islands, and will promote common interests of other countries in the region.

The Agreement will further strengthen the bilateral cooperation between China and Solomon Islands in areas such as disaster response, humanitarian aid, development assistance and maintaining social order, to jointly address traditional and non-traditional security challenges. It will inject important positive energy and certainties into the security environment of Solomon Islands and the region as a whole.

Note the parallels in each case: consensus and respect for sovereignty between two highly unequal partners, along with references to the contributions to regional security that a Chinese military presence will bring.

And the leaked text of the draft China–Solomons agreement echoes the logistics support functions provided in Djibouti to China’s military: ‘China may, according to its own needs and with the consent of the Solomon Islands, make ship visits to, carry out logistical replenishment in, and have stopover and transition in Solomon Islands.’

That’s a logistics support facility for China’s military. As we’ve seen in the case of the People’s Liberation Army base in Djibouti, whether it’s called a base, a place or a duck won’t matter. If it goes ahead, the Chinese military will have a place to operate across the South Pacific from, supplied by Prime Minister Manasseh Sogavare and his government.

And the way the Djibouti base was negotiated, justified and described publicly should give no comfort to anyone watching this agreement come into being—apart from Beijing, Sogavare and any Solomons politicians benefitting directly from the arrangements and their negotiation.

Of course, there’s a glaring distinction between the Solomon Islands’ place in the South Pacific and Djibouti. The Horn of Africa faced external security threats—piracy and international terrorism—with multinational navy deployments to counter them, joined by the PLA Navy, and sits beside a key global shipping route.

The South Pacific, by happy contrast, is free from external security threats, with only the routine border security issues all states face. That cuts to the heart of Sogavare’s public rationale for the agreement, which he says is to deal with the Solomons’ ‘soft and hard’ security threats.

Sogavare’s statement that, ‘Contrary to the misinformation promoted by anti-government commentators, the agreement does not invite PRC or any other countries for that matter to establish its military base here’, means nothing, other than showing he’s well practised in semantics and textual interpretations.

The people of Solomon Islands, the nation’s bureaucracy and police force, and all its Pacific partners and neighbours can see the path China is taking.

For Solomon Islanders, it’s one that leads to the presence of Chinese military power inside their country, operating according to China’s needs. And the security agencies China will send under this agreement—the Ministry of Public Security’s police, the PLA and People’s Armed Police—are responsible for the brutal crackdowns on freedoms in Hong Kong and Xinjiang and for the Tiananmen Square massacre. Their behaviour against their own people surely indicates how they’ll behave when used against Solomon Islands citizens, whether by Sogavare or ‘according to [China’s] needs’.

For other Pacific partners, from Fiji to Papua New Guinea and Nuie, it means bringing this same authoritarian military power to places near them, at the invitation of a government within the Pacific family.

And the contribution we can expect China to make to the South Pacific’s regional security? Military tension and even conflict will be the likely results.

We can see the future for the South Pacific in the Chinese military’s record in the South and East China Seas and Taiwan Strait. An example closer to home was the use of a military laser against a Royal Australian Air Force patrol aircraft off Darwin in February.

The Australian government’s approach has been to keep all projects and programs between Australia and the Solomons running as if none of this is happening. It’s even building a base for the Guardian-class patrol boats Australia has given the Solomons.

Australian, PNG and New Zealand police supported by the Australian Defence Force also continue to work there in accordance with the Solomons’ request for security assistance. This support, ironically, along with Chinese cash, has probably kept Sogavare in power and enabled him to keep negotiating his secret deal with Beijing.

Continuing Australian and regional support is understandable, despite the underlying impression of absurdity. It makes absolute sense to keep engaging with and supporting the Solomon Islands people and their government agencies to build the prosperity and security of our regional partner.

It makes little sense, though, to give Sogavare active support when he’s acting against the region’s security and against key Australian interests by pursuing his China deal.

It’s time to talk to and deal with Sogavare honestly, directly and publicly, in the frank ways his population, other Pacific partners and people in the Solomons parliament and other institutions need to hear. In a recent poll, 91% of Solomon Islanders said they wanted their country to be aligned with liberal democratic countries. Only 9% said they preferred China.

Sogavare is endangering his people’s individual and societal freedoms through his increasingly close partnership with Beijing and its repressive security forces. And he’s bringing real military tension and the prospects of actual military conflict closer to all of us. All for reasons that are incomprehensible aside from personal interest in power and perhaps money.

He cannot have even a whiff of support from Australia or any other Pacific nation as he goes down this path. Leadership engagement with Sogavare or any of his ministers has to at least begin with a public condemnation of his deal with Beijing and a call for him to scrap it.

And visits to Australia or other Pacific partners by Sogavare and his ministers should be on hold while the deal is on the table or in force. The recent letter from Federated States of Micronesia President David Panuelo shows the way: respectful but firm on the consequences of Sogavare’s actions being far wider than just himself and his nation.

It can’t be business as usual engaging with Sogavare while he damages his people’s freedoms, his country’s sovereignty and the region’s security.