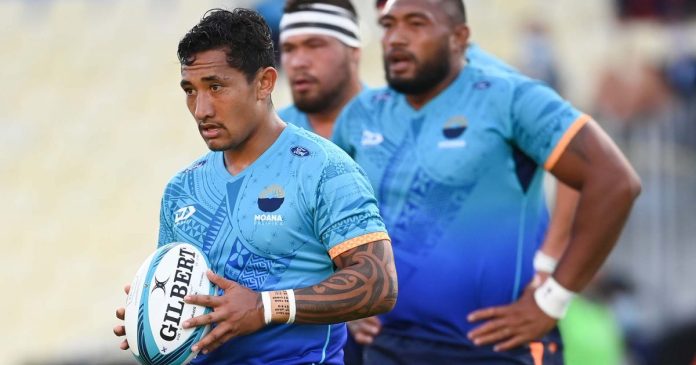 Moana Pasifika has named their team to play the Highlanders in the inaugural DHL Super Rugby Pacific match between the franchises. The squad will travel to Dunedin’s Forsyth Barr Stadium in search of their second win of the season on Friday night.

After being on the receiving end of a 46-16 defeat at the hands of the Blues, Head Coach Aaron Mauger reflected on the week that was.

“Although we know we’re heading in the right direction as a team we were disappointed that we didn’t offer our best performance against the Blues at Eden Park. Once again, there were some valuable lessons from that game around building pressure through executing our basics with a more ruthless edge and discipline for longer periods. We are capable of doing this so the challenge for all of us is to prepare well again this week and deliver those capabilities on Friday night against a hungry Highlanders team who will make us earn everything we get.”

“The pleasing thing about the game was our start. We did build pressure early on, so our challenge is to be ruthless with executing our basics for longer periods and ideally, 80 minutes.”

Moana Pasifika have completed their first of two storm weeks where they play their postponed fixtures midweek. In the first of the three games, they came away with a win against the Hurricanes but subsequently lost two consecutive matches to the Blues.

“The big focus this week is welcoming back a large contingent of players and dealing with the residual effects of playing three games in eight days.”

Sekope Kepu will wear the captain’s armband and is joined in the front row by Ezekiel Lindenmuth and Luteru Tolai, who is elevated from the bench to the starting line-up.

Samuel Slade returns to the match day 23 and combines with Veikoso Poloniati at lock. A reshuffle in the loose forward trio sees Solomone Funaki move from openside to blindside, with Alamanda Motuga at 7 and Penitoa Finau getting an opportunity at number 8.

Ereatara Enari and the experienced Christian Leali’ifano will drive the game from 9 and 10 respectively. The formidable midfield combination of Danny Toala and Levi Aumua make a return to Forsyth Barr Stadium after making their debut appearance together at the same venue back in round 3.

Timoci Tavatavanawai retains his spot on the left wing after an impressive debut last week and is joined by Tima Fainga’anuku and William Havili in the back three.

“We go into another storm of three games in eight days, so we will use our entire squad to get through. The pleasing thing from the first storm was that everybody who was fit to play got some good minutes in. We have now had 45 players shine in a Moana Pasifika jersey, which has created a healthy debate about our strongest team looks like when all of our players are fully fit and available again,” says Mauger.