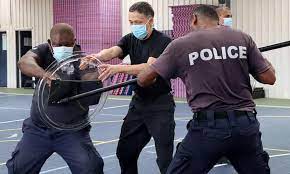 China’s proposed treaty with Solomon Islands is an “adverse development for Australia’s security” but it may be too late to stop the deal, a former senior Australian intelligence official has warned.

Richard Maude, head of the Office of National Assessments from 2013 to 2016 and an experienced former diplomat, urged the Morrison government not to engage in megaphone diplomacy as it tried to persuade Solomon Islands to change course.

In an interview with Guardian Australia, Maude said the Australian government should raise its concerns “through quiet diplomacy” because “any perception that we’re leaning on the Solomon Islands government would be counterproductive”.

The prime minister of Solomon Islands, Manasseh Sogavare, this week dismissed foreign criticism of the country’s security negotiations with Beijing as “insulting” and blamed the leak of the draft document on “some lunatics and agents of foreign regimes in the government system”.

A draft version of an agreement, which emerged online last week, said Solomon Islands may request China to send police, armed police, military personnel and other law enforcement and armed forces to the country for a range of tasks such as maintaining social order and protecting lives and property.

According to the draft text, the agreement would also pave the way for China to “make ship visits to, carry out logistical replenishment in, and have stopover and transition in Solomon Islands” while Chinese forces “can be used to protect the safety of Chinese personnel and major projects in Solomon Islands”.

The Australian and New Zealand governments have raised concerns the agreement could undermine the security and stability of the Pacific region.

Sogavare told parliament on Tuesday there was “no intention whatsoever to ask China to build a military base” in Solomon Islands and added that the document was “ready for signing”.

Maude, who has served in senior security and foreign policy roles under both sides of Australian politics, said the deal appeared likely to proceed. “I think the chances of turning it off are slim now,” he said.

He said it was “emblematic of an increasingly tough contest for influence in the Pacific and a future in which China will press its interests where it can very strongly”.

Maude, who was a national security adviser to Julia Gillard and led the ONA under Tony Abbott and Malcolm Turnbull, said it “potentially opens the door to a stronger and more frequent Chinese military presence in the Pacific”.

An agreement that sought to facilitate more Chinese ship visits “gives the Chinese navy a toehold in the Pacific”.

“That’s something that Australian defence and strategic planners are right to be very concerned about,” said Maude, now a senior fellow at the Asia Society Policy Institute.

“Anything that facilitates a more significant Chinese military presence in Australia’s near neighbourhood is an adverse development for Australia’s security.

“It potentially makes it easier to eavesdrop on Australia. It makes it easier for China to interfere in the affairs of island countries. It could spark responses from other countries, including Australia, leading to a more crowded Pacific in a military sense. None of that is good for the stability of the Pacific.”

Maude said Australia was right to argue that such developments were “fundamentally not in the interests of Pacific Island countries”.

“Many Pacific island governments will see opportunity in their relations with China as much as they might see risk,” he said, adding: “One big problem for Australia is not that China sees a role for itself in the Pacific, but from Canberra’s perspective that China’s approach in the Pacific is too often zero-sum.

“It seeks advantage for itself at Australia and others’ expense, often without regard for the stability of island countries and the integrity of their politics.”

Maude led the whole-of-government taskforce behind Australia’s 2017 foreign policy white paper, which noted that many countries in the Pacific had “limited capacity to respond individually to security challenges”.

The white paper said Australia would work with Honiara to protect stability as the regional assistance mission to Solomon Islands wound down in 2017. The Australian government vowed then to “step up our efforts to support a more resilient Pacific”.

Maude said the launch of Australia’s Pacific Step-Up initiative and additional funding commitments in 2018 were “a clear indication that perhaps Australia was coasting in the region and needed to do more to response to Pacific Island needs and bolster its own influence in this new, competitive era”.

But he stopped short of saying Australia had dropped the ball, “because that takes the Pacific island countries themselves out of the equation”.

Maude said Australia should seek to be “the best possible partner that we can be” in responding to the needs of Pacific countries.

He called for broader increase in foreign aid across the board, saying while Tuesday’s budget had ended the freeze on official development assistance it was still “inadequate for the times we’re in”.

The Australian government has insisted it was not blindsided by the emergence of the draft security agreement.

The foreign affairs minister, Marise Payne, said the government had been been “aware of increasing interest with engagement with China in the Solomon Islands for some time” and had “regularly and respectfully raised our concerns”.

Payne said Australia had demonstrated it was “always ready to support the Solomon Islands, together with members of the Pacific family”.

“[Scott] Morrison talks tough on China, but on his watch a member of our Pacific family plans to sign a security treaty with China,” Wong said.

The independent senator Jacqui Lambie said the Australian Government’s Pacific Step up had “failed miserably” and the Coalition “should be ashamed.

Australia urged to intervene as China tries to buy a strategic...