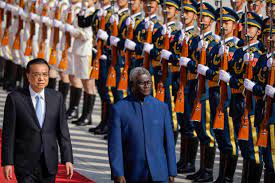 Australia has been told it must increase investment and look at establishing a military presence in the Pacific to counter China’s influence in the region after Solomon Islands confirmed it was close to signing a security deal with Beijing.

Solomon Islands Prime Minister Manasseh Sogavare on Tuesday defended the proposed deal as he denied his country has “picked a side”. He said he felt “insulted” by claims the deal would pave the way for the establishment of a Chinese naval base.

In a fiery speech to parliament, he said the array of security threats facing the Pacific nation meant Honiara needed to have agreements with a range of countries, and said Western democracies should not try to impose their values on other nations.

Experts said confirmation of the security pact, which Sogavare said was close to being signed, justified fears by Australian security agencies about China’s ambitions in the region. They said Canberra must significantly ramp up funding to the region and consider establishing its own military presence there.

Australian Strategic Policy Institute executive director Peter Jennings said: “We are over-estimating the level of influence we have in the region, and certainly on measures of business investment and people to people contact, it’s much thinner than it should be if Australia wants to exercise a leadership role on security in the Pacific.

“We are going to have to rethink how we maintain a defence presence in the region and that should also force us to relook at what was up until now a Defence view that we shouldn’t seek to base navy or airforce assets in the region. There is a lot more we can do but not inside a defence budget of 2.1 per cent of GDP.”

The head of the Australian National University’s National Security College, Rory Medcalf, said confirmation of the deal was alarming. “Australian security agencies have been right to be concerned about China’s security ambitions in the Pacific, for years now.”

The Solomons deal is shaping up to be the biggest point of tension in Australia-China relations, which have been deteriorating over the past three years.

Sogavare intimated a deal with Beijing was necessary after the Australian-led peacekeeping Solomons International Assistance Force, deployed after anti-government riots broke out in November, had refused to defend Chinese funded infrastructure projects.

“We would be simply foolish and sitting ducks if we did nothing to protect infrastructure gifted by our friends.”

Sogavare’s address to Parliament came as China’s ambassador to Australia Xiao Qian downplayed the threat to Pacific security from a Chinese military presence.

“I don’t know about the so-called Chinese base on the island. I only heard it from the media,” he said.

While Xiao said China wanted to have a constructive relationship with Australia, the messaging from China’s Foreign Ministry in Beijing was different. “Any attempt to disrupt and undermine mutually beneficial co-operation between China and Pacific island countries is doomed to fail,” a spokesman said on Monday.

Details of the leaked draft security agreement have alarmed Australia, New Zealand and the U.S because of the potential for Chinese warships and submarines to operate deep into the South Pacific, choke off shipping lanes and threaten Australia.

The Australian Financial Review understands France, which has Pacific territories in New Caledonia and French Polynesia, and Britain, which enjoys ties to Pacific nations through the Commonwealth, are also concerned by the deal, along with Japan.

Sogavare revealed he had texted Morrison and had written him a letter.

While expressing gratitude to Australia and New Zealand, Sogavare said the security threats facing Solomon Islands, including climate change, made it necessary for Honiara to seek a wider circle of partners.

But he said his country had not surrendered its sovereignty, and Chinese police and military would be allowed to enter the country only at Solomon Islands’ invitation.

“We have no intention of pitching into any geopolitical power struggle,” Sogavare said.

“We are not pressured in any way by our new friends and there is no intention whatsoever to ask China to build a military base in the Solomon Islands.”

During last year’s riots, parts of Honiara’s Chinatown was burned down and infrastructure for the Pacific Games was also targeted.