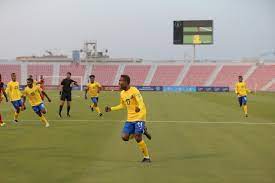 The Solomon Islands have booked their place in the FIFA World Cup Qatar 2022 Oceania Qualifiers final after a brace from Alvin Hou helped them win a 3-2 thriller v Papua New Guinea at the Grand Hamad Stadium in Doha.

An exciting first-half began as it meant to go on, with both goalkeepers called into action within the opening five minutes. Papua New Guinea stopper Ronald Warisan was the first to make a save, reacting smartly to push a dangerous Prince Tahunipue cross away. PNG forward Ati Kepo then tried to duplicate his stunning solo effort against Fiji, but Solomon Islands’ number one Phillip Mango got down well to block at his near-post.

PNG were threatening again inside 10 minutes, with good work from Tommy Semmy on the left-hand side almost forcing Javin Wae to put the ball into his own net.

However, it was Solomon Islands who soon found themselves enjoying a period of extended pressure. First, William Komasi’s powerful strike from the edge of the box rocketed over Warisan’s crossbar. Then, Raphael Lea’i, the hat-trick hero against Tahiti, saw a dangerous cross well cleared by PNG centre-back Felix Komolong and a free-kick effort punched away by Warisan.

Despite the consistent Solomons pressure, PNG took the lead. Captain Alvin Komolong eventually forcing the ball into the opposing net after Emmanuel Airem hammered his initial flicked header back into the danger zone.

Solomon Islands responded strongly, with Alvin Hou having two chances in quick succession. First, he flashed a difficult effort high and wide before a better strike forced Warisan down low to parry clear.

Eventually, it proved to be third time lucky for Hou. The wide-man pulled the Solomon Islands level on 33 minutes, his left-footed effort from the corner of the box leaving Warisan with no chance on this occasion.

The pattern continued, with Solomon Islands looking most likely to take the lead and they were soon given the perfect chance to do so before half-time.

Lea’i used his pace to skip away from Kapuls skipper Komolong whose despairing challenge did not require referee Mohammed Abdulla Mohammed to use VAR, in use in an OFC competition for the first time, to award the spot-kick.

Luckily for the PNG captain, his opposite number Micah Lea’alafa could not capitalise, cannoning his effort off the post to ensure the teams went in level at the end of an entertaining first-half.

It was PNG who started the second-half strongest. Kepo’s powerful headed effort forced a great save from Mango in the Solomons goal before Michael Foster miscued a back-post effort off his shoulder, as the Kapuls continued to threaten in the air. Quick-thinking from Mango then prevented Semmy from a clear one-on-one effort.

However, despite PNG’s impressive start to the second-half, Solomon Islands soon took control of the game with a quickfire double..

It was Hou, the danger-man from the first-half, who restored the lead, his half-volley from a Felix Komolong clearance proving too strong for Warisan. It was his last action of the game, as he was stretchered off injured just minutes later, and now looks a doubt for the final.

The injury blow did not dampen the Solomons spirit, as just five minutes later Lea’i used his pace to again race clear of the PNG defence before smashing the ball through Warisan to grab his fourth goal in just three games.

Papua New Guinea pressed hard to get back into the game, with Gunemba twice denied by an onrushing Mango and that endeavour soon paid off. Kepo’s driving run and shot which deflected off Haddis Aengari and looped over Mango sparked a frenetic final few minutes with Semmy and Gunemba both having chances to take the game to extra-time.

However, Solomon Islands managed to hang on to book their place in the final of the FIFA World Cup Qatar 2022 Oceania Qualifiers.