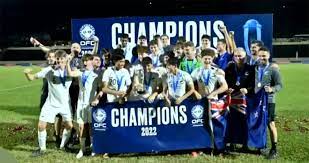 New Zealand have won the OFC U-19 Championship 2022 after a 3-0 win over Fiji at Stade Pater in Papeete, Tahiti.

A brace from Oliver Colloty and a long-range strike from Jay Herdman secured the Junior All Whites their eighth title despite Fiji’s brave effort.

New Zealand have won the last five OFC U-19 Championships they have entered. The only blemish is the 2014 edition, which they did not enter, Fiji winning on that occasion, making this a clash between the past two champions.

It was New Zealand who started strongest, Colloty looking a threat from the start. Fiji goalkeeper Aydin Mustahib pulled off a fine reaction save to deny the New Zealand striker after 10 minutes before Colloty blazed over from close range minutes later.

But Colloty soon had the goal his performance deserved, heading home Oliver Fay’s perfect cross for 1-0.

A few minutes later and the striker secured his second to make it 2-0. Fay was again the provider, this time Colloty taking a controlling touch on his head before nodding a tidy finish over Mustahib. Colloty’s brace ensured he and teammate Kian Donkers will share the Golden Boot award with nine goals each.

Fiji came out firing in the second-half and nearly became the first team to score past New Zealand at this tournament. However, Lachlan Lal could only hit the post from close range after his tireless work earned a shooting opportunity.

Shortly after rattling the crossbar the from close range, Herdman sealed the victory, hitting a powerful strike from range which beat Mustahib to ensure New Zealand defended their title from 2018.

Both teams will now turn their attentions to the FIFA U-20 World Cup Indonesia 2023™ in May-June next year after qualifying as the two highest placed nations at the OFC U-19 Championship 2022.

Fiji through to OFC Women’s Nations Cup semis after 2-0 victory...