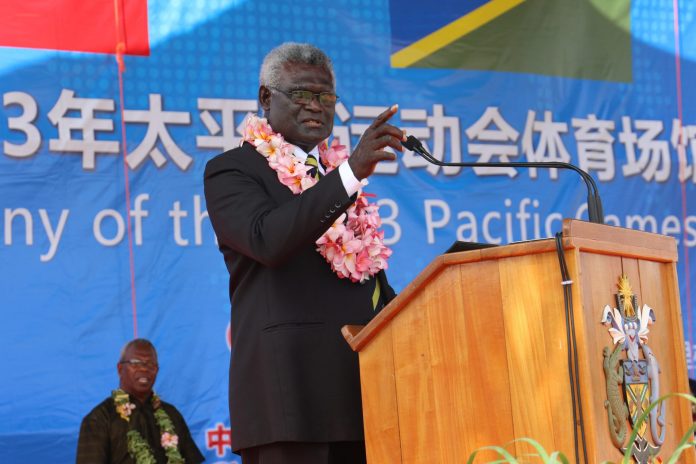 A leaked draft security agreement being negotiated between China and Solomon Islands could have security implications for the whole Pacific. The draft document sets out a broad framework covering Chinese “police, armed police, military personnel and other law enforcement and armed forces” deployments to Solomon Islands. The agreement also allows China, with the consent of Solomon Islands, to make ship visits, provide logistical support and have stopovers and transition in Solomon Islands.

All Pacific countries have a stake in protecting the stability and security of the region. Pacific Islands Forum members, including Australia, agreed in the 2018 Boe Declaration to address regional security challenges collectively. A bilateral agreement such as the one proposed between China and Solomon Islands undermines that sentiment and shows a limited appreciation for security of the region as a whole by whomever was the leaked draft’s initial author.

The ambitious scope of this draft agreement is further evidence of China’s strategic intent in the Pacific. Whether or not China will ultimately be able to establish a permanent military base in Solomon Islands is not yet certain – if anything, this is the first step of many towards such a goal. The leaked document is an early draft and Solomon Islands would no doubt seek to narrow the terms of the agreement, walking back some of the commitments that China has proposed.

Solomon Islands’ increasingly close ties with China since the switch of diplomatic recognition from Taiwan to China in 2019 remains a highly sensitive issue domestically. The civil unrest that broke out in November 2021 in Honiara was sparked, in part, by the switch, though underlying drivers of unrest are domestic not geopolitical. Longstanding provincial rivalries, deep economic problems, concerns about the country’s growing links with China – for which Solomon Islands prime minister Manasseh Sogavare was seen as the main proponent – and latent anti-Asian sentiment in the community, coalesced into a cocktail of violence and destruction targeting Honiara’s Chinatown district. Four lives were lost and over 70 businesses were destroyed.

When the unrest broke out, Sogavare requested urgent assistance from Australia, which was able to deploy an emergency response within 24 hours through an existing bilateral security agreement that is much more scaled back than what China is looking to secure. Papua New Guinea, Fiji and New Zealand also sent personnel. This was a regional response to a regional problem and is now referred to as the Solomons International Assistance Force. Australia has announced it will extend this presence until December 2023.

But the targeting of Chinese nationals during the riots has also created a reason for a Chinese government contribution to security in Honiara. China has since sent police liaison officers to train the Royal Solomon Islands Police Force in public order, as well as anti-riot equipment. The increased Chinese security presence concerned Australian officials and questions remain around how it will sit alongside Australia’s decades-long police support programs.

More recently, a Solomon Islands newspaper reported a large cache of Chinese replica assault rifles was allegedly spirited into the country on a logging ship in the dead of night. This triggered a flurry of speculation on social media as to their true purpose, and a statement from Solomon Islands police that it would investigate how the story came out. Opposition politicians questioned how far Chinese security cooperation with Solomon Islands would go.

This draft agreement provides a clue. But the terms are not yet finalised. Signing up to a security agreement with China that could trigger perceptions of infringements on Solomon Islands’ sovereignty would contribute to internal instability at time when the issues behind last year’s riots are not yet settled. It would also cause concern among other Pacific nations, not just Australia. A document that could over-accommodate the reach of China’s security apparatus into Solomon Islands would be politically damaging for prime minister Sogavare, who would expose himself to accusations of elite capture in the context of the recent riots.

Solomon Islands’ decision to switch its diplomatic recognition from Taiwan to China was met with fierce political opposition in the national parliament and criticism by authorities in the province of Malaita, which sought to maintain ties with Taiwan. That this agreement was leaked by an adviser to Malaitan premier Daniel Suidani, and just days before Solomons parliament is due to sit again, is telling.

Sogavare said at the time that the switch to China would deliver more economic benefits for Solomon Islands than if the country had maintained its ties with Taiwan. Since the switch, Sogavare has sought to demonstrate to the Solomon Islands people that the benefits are coming – he’s under pressure to deliver after pushing through the decision in 2019 with few perceived benefits beyond what Taiwan was already providing.

The scope of the agreement allows China to provide security assistance to major projects. With more than 90% of Solomon Islands’ extractive resources by weight going to China in 2019, and a slew of major infrastructure projects being promised by Chinese state-owned enterprises in the country, such an agreement could be tied to Sogavare’s attempt to deliver on his promise of increased economic benefits to Solomon Islands arising from the switch.

The regional order is changing rapidly and will look very different over the next 10 years. It will be more crowded. Australia cannot, and does not, expect to be the only security partner for Pacific countries. But an increased security presence of a country like China in the Pacific further escalates the geopolitical competition in the region. The potentially zero-sum nature of great power rivalry in the Pacific does not sufficiently address the prosperity needs of individual Pacific countries and can undermine their security and stability, particularly those with a recent history of internal conflict such as Solomon Islands.

Australia will have to be realistic about an increased Chinese security presence in the Pacific. The challenge for policymakers in Canberra will be how to respond to an increasingly crowded Pacific without escalating geopolitical tensions in the region. Australia should continue to focus on providing security support that protects Pacific countries’ sovereignty, is transparent, and delivers on the human security priorities Pacific countries have identified for themselves.

Mihai Sora is a Research Fellow in the Pacific Islands Programme at the Lowy Institute, and a former Australian diplomat to Solomon Islands.

Papua New Guinea election violence: what has caused it and what...