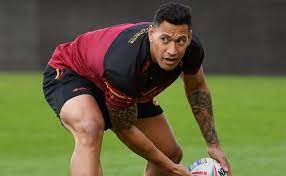 Controversial Israel Folau is “definitely interested” in playing for Tonga at next year’s Rugby World Cup and has “no regrets” over the homophobic comments that ended his Wallabies career.

The devoutly Christian full-back — part of the Wallabies team that lost the 2015 World Cup final to New Zealand at Twickenham — was sacked by Rugby Australia in 2019 for saying that “hell awaits” gay people and others he considers sinners in a post on social media.

The dual-code international moved to Japan at the end of last year to resume his rugby union career after a brief return to rugby league, and he is hoping to take advantage of a new rule that allows him to represent the country of his parents’ birth.

The New South Wales-born 32-year-old is eligible to play for Tonga and he told AFP that it would be “special” to make the switch after being sounded out by head coach Toutai Kefu.

“Representing your heritage and where you’re from, representing your parents is something that is quite close to not only myself but to many other Polynesians,” said Folau, Super Rugby’s all-time top try-scorer.

“It would be a huge honour if I got the opportunity. We’ll see if that opportunity comes about but I’d love to put the Tongan jersey on and represent Tonga.”

Players can now switch teams if they have not been selected for their national side for at least three years and have a parent or grandparent born in the country they wish to represent.

Folau meets that criteria, having won the last of his 73 caps for the Wallabies in 2018 before he was booted out for a “high-level breach” of Rugby Australia’s code of conduct.

He said he has now “moved forward from what’s happened in the past” and was enjoying playing again after joining Japanese club NTT Communications Shining Arcs Tokyo-Bay Urayasu on a two-year deal.

“I have no regrets about anything but it’s led me here to Japan and I’m grateful for the opportunity,” said Folau, who has scored eight tries in seven games for his new team, who are bottom of the first-division table.

“I’m just stoked to be playing rugby again. It’s a different experience to what I’m used to back in Australia but it’s something that I’m really enjoying.”

He had previously been embroiled in a similar row and he went on to cause further offence in 2019 when he suggested that bushfires and drought ravaging Australia were “God’s judgement” for the legalisation of same-sex marriage and abortion.

His sacking by Rugby Australia sparked a backlash from supporters of free speech and religious expression.

Folau took the governing body to court for unfair dismissal, demanding AUS$14 million (US$9.5 million) in compensation under employment legislation that bans sacking someone because of their religious beliefs.

The case was settled out of court with Rugby Australia reported to have paid Folau AUD$4 million ($3 million) and the player claiming he had been “vindicated”.

Now Folau says he is keen to block out the “outside noise” and “can’t be sitting there worrying about what people think” of him.

“I don’t see myself as a symbol or anything like that — I’m just a regular person,” he said.

“I’ve been blessed to have a talent to play the game of rugby. Everyone will have different opinions but that’s up to them. I’m here and I’m focusing really hard on playing rugby.”

Folau said that his move to Japan had been “positive” and he would “love to play beyond next year” if he was still in good enough physical condition.

He has not thought about what he will do when he retires, but he laughed off reports that he could enter politics as “definitely not true”.

Next year’s World Cup in France could give him the chance to end his career on a high if Tonga qualify, and he thinks the new eligibility rule could be a game-changer for Pacific Island teams.

“It’s only going to raise the standard across the board of world rugby and strengthen those Tier Two nations,” he said.